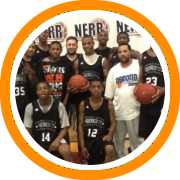 There isn’t a hotter u16 team in New England right now than Connecticut Select, who have now captured three consecutive titles.

The streak started earlier this month at the Connecticut AAU state tournament and continued last week at the Hall of Fame Spring Classic.  This week, Select rattled off five more victories including a hard fought win over the Westchester Hawks in the final.

It’s hard to identify just one MVP on a team that gets consistent contributions from as many as seven different players, but this weekend Shane Christie proved to be the difference maker on a number of different occasions for Connecticut Select.

Christie came off the bench to provide a lockdown perimeter defender while also generating an offensive sparkplug for the team.  He made big, dagger type, three-pointers in multiple games while also turning the momentum with some inspirational dunks in the open floor.

Devonte Banner (Westchester Hawks) – A good sized swingman with long arms and a deceptive first step, Banner uses both assets in order to slash his way to the bucket while also serving as the team’s best perimeter defender.

Matt Barr (MB Nation) – He opened the tournament with a 31 point performance showing his full offensive repertoire while also utilizing his high motor on the opposite end to create offense from his defense.

Amir Bell (Team Jersey Elite) – A big guard at six-foot-three, Bell knows how to make his tools work for him and he did that to score the ball at will this weekend.  He’s a nice looking prospect who is definitely worth being monitored moving forward.

Isaiah Bess (MB Nation) – A good sized forward with some intriguing upside, Bess is a high level athlete who plays above the rim, has some natural talent, and is just starting to realize how to put all the pieces together.

Trevon Betts (Mass Elite) – His ball skills are very polished as he can get where he wants off the dribble, find open teammates or knock down jumpers.  He’s also an unselfish player who makes the extra pass and gets after it defensively.

Jaylen Blakely (Boston Titans) – He’s the type of dynamic scoring playmaker who can get anywhere he wants on the floor and create his own shot on demand.  That special talent was on full display this weekend as he put up big numbers.

Henry Bolton (Rhode Island Hawks Black) – The St. Andrew’s guard can flat out score the ball.  He’s at his best going to the rim, is lethal in the open floor, and was even consistent with his jumper this weekend, which meant defenders had little hope.

Malcolm Brendt (Metro Boston) – A versatile guard with the size to see over the defense, Brendt can play on or off the ball, has a good feel for the game, is capable of being a factor with his own scoring or by facilitating for others.

Alec Brennan (Expressions Elite) – It’s been a strong spring for Brennan as he’s become more assertive inside the paint while putting his unique combination of size and skill on display.  It was more of the same for the talented face-up big man this weekend.

Max Butterbrodt (Seacoast Spartans) – A versatile six-foot-four forward who went both inside and out, the St. John’s Prep product was a dominant presence on both ends of the ball for the Spartans this weekend.

Raiquan Clark (Connecticut Select) – The Hillhouse swingman was another pivotal contributor during Connecticut Select’s championship run, providing an athletic driver on the wing along with a playmaking defender.

Dustin Cole (MB Nation) – Cole has matured into a pure point guard who runs the show and makes those around him better but he’s still capable of putting points on the board in bunches with his dribble drive and jumper.

Chase Daniels (Connecticut Select) – Arguably the top overall prospect on the championship squad, Daniels has the size and athleticism to change the game in the paint with his powerful finishes, rebounding, and shot-blocking.

Jackson Donahue (Rhode Island Hawks Black) – Once he gets hot there is no stopping him, and that’s exactly what happened this weekend.  That wave of momentum was all he needed to put big numbers on the board throughout the tournament.

Tyler Drews (Team Jersey Elite) – The boys from New Jersey made a run all the way to the semis before being stopped by the Westchester Hawks and Drews was one of the driving forces on the team with his playmaking and stability.

Deron Dunbar Jr. (Connecticut Roughriders – Lawson) – He was a bright spot for the Roughriders this weekend – refusing to back down from any challenge, showing leadership, and attacking the basket at will.

Josh Fleming (East Coast Elite) – Big things come in little packages for ECE, especially when it comes to Fleming’s ability to knock down shots from behind the three-point line as the undersized guard drilled shots in bunches from downtown.

Sam Glazer (Connecticut Wizards) – A skilled forward from the Hopkins School, Glazer will battle inside for rebounds and loose balls but is also very dangerous on the perimeter with his ability to knock down three-point shots.

Juwan Gooding (Expressions Elite Red) – The young southpaw guard is already a well known talent and he backed up his reputation this weekend showing shooting range well beyond the college arc while making plays on both ends of the floor.

Alex Holloway (Pawtucket Hoops) – This floor general has the intellect and unselfishness you would expect from a coach’s son.  He can go right or left, has a knack for finding his teammates, and excellent ability to thread the needle with his passes.

Tom Horvat (Rhode Island Hawks Red) – A fundamentally sound player who is solid in virtually every aspect of the game, Horvat won’t wow you with highlight reel dunks but he does impact the game in a variety of ways to help his team get wins.

Curtis Hyman (Connecticut Roughriders) – Hyman’s potential and production caught our eye over the weekend and that was before we realized he was just coming back from injury and not yet 100%.  He’s definitely someone to see more of down the road.

Kealen Ives (Rhode Island Hawks Black) – He sets the table for the team, instigating the team’s defensive pressure and facilitating for others on the offensive end, in order to make his teammates better on both sides of the floor.

Aidan James (Middlesex Magic) – This guard did double duty this weekend for the Magic – running the show from the point for large stretches at a time but also leading the team in scoring with his pure shooting stroke.

Malik James (Expressions Elite) – He is a pure point guard who runs the show and provides a stabilizing presence in the backcourt for Expressions Elite with his ball-handling, decision making, court vision, and high basketball I.Q.

Craven Johnson (Team Impact) - Johnson led Team Impact throughout the weekend, being their most consistent scoring presence and showing a full arsenal of offensive moves.

Paul Jorgenson (New Heights) – A physically imposing six-foot-three lead guard, Jorgenson has the size, intangibles, and natural ability to be a high level prospect down the road and showed off a variety of different attacking tools in this setting.

M.J. Kehoe (Connecticut Gold) – His frame seems to stretch more every month as Kehoe is now a long six-foot-five forward with solid bounce.  He is always around the ball, a major factor filling lanes in transition, and potential mismatch threat down the road.

Patchie Kehoe (Connecticut Gold) – The southpaw is a big time quarterback prospect on the gridiron and brings a similar approach to the hardwood as he runs the show with his high intellect while also utilizing a developed skill set to impact the game.

Aminenyejesu Lakoju (RBSP Runnin Rebels) – Pound for pound, few players were more efficient inside the lane as Lakoju does a great job of using his body to dig out space in order to score points and grab rebounds.

Phil Leotsakos (Middlesex Magic) – The six-foot-six sophomore forward had a solid showing this weekend and played his way into our prospect database by driving to the rim, hitting jumpers with range, and defending multiple positions.

Kevawn Lord (Westside Terriers) – The Terriers were one of the surprise stories of the u16 bracket and Lord was one of their primary playmakers, electrifying the crowd with his breakdown prowess off the bounce and finishing with body control.

Ryan Lusk (Connecticut Stars) – A six-foot-four forward from Norwich Free Academy, Lusk aggressively goes to the glass and attacks the basket, but is also confident with the ball and able to step out and knock down open threes.

Anthony Mack (JC Ballers) – He’s only an 8th grader but already used to playing up against older competition after suiting up with his high school team this year.  Mack isn’t just talented, he’s also hungry – showing great effort and diving on the floor.

James Loring (Boston Titans) – The six-foot-six big man is a guy to keep an eye on.  He made his most consistent contributions by crashing the glass and blocking shots, but once he gets a little more aggressive offensively he’ll be a force to be reckoned with.

Brandon Martin (Westchester Hawks) – A strong six-foot-three athlete, Martin is currently transitioning his game from the interior to the perimeter while still utilizing the physical tools that once made him so formidable inside.

Rayoni Matos (Greater Boston Lions) – Matos rose to the occasion and helped fuel the Greater Boston Lions into the quarterfinals.  He’s a scoring guard with good individual tools but also stands out with his motor and intangibles.

Dupree McBrayer (Brooklyn Badgers) – An under the radar guy who showed he is going to be a well known prospect down the road, McBrayer is a long lefty with natural talent and plenty of upside once his frame begins to fill out.

Chris Robinson (New Heights) – The six-foot-three sophomore swingman from Cardinal Hayes is a smooth and dynamic slasher who effortlessly glides to the rim and can also drop open jumpers on unsuspecting defenders.

Tyshon Rogers (Connecticut Select) – Versatility was Rogers’ calling card this weekend as he played three different positions, locked down opposing scorers on the defensive end, and made a variety of tough finishes at the rim.

Jared Terrell (Expressions Elite) – Likely the best pure talent in the sophomore division, Terrell scores the ball at will with full onslaught of physical drives, pull-up jumpers, and three balls while also having the power and explosiveness to play high above the rim.

Austin White (Westchester Hawks) – The playmaking lead guard suffered a sprained ankle on Saturday but came back to lead the Hawks on their championship run on Sunday, showing his ability to break down defenders and create for himself and his teammates.

Miles Wright (Metro Boston) – A strong and athletic swingman, Wright scored the ball consistently through the weekend by attacking the basket with tough, straight line drives while also providing a consistent presence on the defensive end.

Nelson Zayas (BasketBull) – Few players in the field could stroke shots with quite the range that Zayas showed.  He’s a threat anytime he gets within 25 feet and is deceptively crafty with the ball when he’s able to get inside the paint.