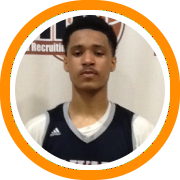 The Super 16 Showcase continued Saturday evening at Connecticut College with primarily 16u and 17u action but a few younger names managed to steal the show led the by the next budding star of the Mass Rivals program.

Chris Baldwin, Mass Rivals – With usual star Noah Vonleh sidelined with a gimpy ankle, Baldwin seized the opportunity and had what will likely be remembered as his breakout performance.  The 6’7” forward rebounded the ball well above the rim, ran the floor like a deer, and hammered down the day’s two loudest dunks right on the head’s of unsuspecting defenders.  Baldwin is physical, athletic, and aggressive from the forward position and will no doubt become a hot national name in the very near future.

Tyonne Malone, Mass Rivals – Even younger than Baldwin as a member of the 2016 class Malone saw time with both Rivals 15u and 17u teams.  The 6’6” wing made athletic plays in transition and was able to drive past his defender in the half court at which point he had no problem elevating and finishing plays at the rim.

Marcel Pettway, BABC – Pettway uses his immense strength to carve out space inside and seal his defender.  Once he catches it down low, Pettway is a master of angles and footwork consistently scoring over taller defenders by out smarting and out muscling them.

Austin Woods, CBC – Woods has transformed his body in the last year transforming from a kid with some baby fat to looking like a grown man with a chiseled frame.  The results on the court are obvious as he looks more athletic and was more successful rebounding balls out of his area as he exploded towards the basketball off the rim.

Bernard Brantley, CBC – The point guard of CBC – Donnelly, Brantley is a calm, under control leader who makes smart decisions with the ball and has a strong understanding of when to get others involved and when to look for his own offense.

Cameron Dobbs, Albany City Rocks – Dobbs stands out at first glance from his long, flowing braids that come to the middle of his back but his game backs up the attention once the ball tips.  A lightning quick, lefty point guard Dobbs lived in the lane and made floater after floater over rotating big men.

Wesley Phillips, Albany City Rocks – A massive body down low Phillips is a power rebounder whose offense consists of simple, power moves on the block.  He showed an ability to follow his own shot and tip the ball towards the rim 3-4 times on the same possession if that’s what it took to get a basket.

Anthony Durham, Huntington Park Warriors – The lanky scoring guard was a constant beeline to the rim as his offense was all on dribble drives and didn’t find a defender that was able to stay in front of him.  Once in the lane Durham showed good bounce around the rim to finish plays over bigger defenders.

Max Motroni, RI Hawks – Motroni is a dangerous weapon from behind the 3 point line who seemed to make every shot he took once he had his feet set.  He is an ultimate zone buster who needs very little time to release his gorgeous jumper and can make them in bunches.

Kealen Ives, RI Hawks – The young, undersized point guard played with a leadership and stability beyond his years making great decisions with the ball and setting up his teams’ offense.  He also showed range on his jumper well past the 3 point line and was a pest pressuring the ball on defense.

Henry Bolton, RI Hawks – A true combo guard Bolton played mostly off the ball today next to Ives and flourished by spotting up for deep catch and shoot jumpers as well as running in transition to finish plays at the rim.

Jackson Donahue, RI Hawks – Another deep sniper for the Hawks in the same mold as Motroni, Donahue reached a point on Saturday where the crowd let out signs of shock every time he missed a shot.  He has very deep range and no fear pulling the trigger making him a dangerous player.

Ian Gardner, CT Select – Gardener made his living on hard drives from the wing on which he invited contact once in the paint.  Given the AAU setting many of these likely fouls were not called in the lane but Gardener had no problem finishing the plays anyway elevating over defenders and absorbing contact as he finished.

Victor Joshua, East Coast Elite – One of the best unsigned 2012 players left in New England, Joshua did his usual thing putting defenders on his hip as he bullied them to rim.  He also made long jumpers and set up teammates in drive and kick situations.  Overall, Joshua was one of the day’s most dominant players.

Chris Braley, Middlesex Magic – A physical specimen standing 6’4” Braley is a pain in the neck to play against.  His energy is seemingly never ending as he outworked the opposition from the opening tip to the final whistle.  Not just a worker, Braley has some skill to back it up utilizing hard baseline drives for scores and showcasing good vision to find open shooters.

Kahlil Dukes, CBC – Dukes did what he does best; make shots from every imaginable spot on the floor.  Catch and shoot 3s, running bank shots, midrange pull-ups off 1 dribble, floaters in the lane, finishes at the rim in transition.  Name a shot and Kahlil Dukes made it on Saturday.

Dimitri Floras, Mass Rivals – Just as teammate Chris Baldwin stepped up in the absence of Noah Vonleh; Floras took center stage with usual PG Kaleb Joseph back at Cushing Academy for the weekend.  In a hard fought, down to the wire victory over the Brooklyn Rens, Floras was sensational making deep jumpers, attacking in transition, and breaking the intense Rens full court pressure.

Fabian McDonald, Brooklyn Rens – A physical lead guard standing 6’1” McDonald did a bit of everything for his team but was most impressive dishing to big men as they cut to the hoop in screen and roll sets.  He also made jumpers and defended like a mad man but the proficiency in screen/roll stood out the most.

Kwanique Martin, Brooklyn Rens – The beneficiary of many of McDonald’s assists, Martin both finished through contact in the lane and popped out to make midrange jump shots.  He rebounded and played physical defense against a much larger Rivals front line and was a major reason the Rens stayed close throughout.

Kareem Davis, BABC – The young, lefty point guard serves as the floor general for the 15u BABC squad and can really do some magical things with the ball.  His handle is unreal as are his vision and ability to slice passes through small angles.  Davis facilitated a bunch of highlight reels plays by whipping passes that nobody else on the court even saw.

Jared Terrell, Expressions – After struggling with his shot for much of the game Terrell took over down the stretch with his team in trouble and made every big shot to lead them to victory.  Having already proven himself as a scorer, it was impressive to watch Terrell be able to will himself out of a slump in the crucial moments and carry his team to the winner’s circle.

Johnnie Spears, Expressions – On a team stocked with lead guards Spears made his biggest impact defensively harassing opposing point guards and generating countless steals.  Once he turned the opponent over, Spears’ quickness in the open court allowed Expressions to convert easy transition buckets on the other end.

Ikenna Ndugba, Expressions – The youngest of the many guards on the Expressions roster, Ndguba was also the quickest and perhaps most dangerous with the ball in his hands.  Every time I looked up he was challenging another big man in the paint after blowing by his defender and more often than not came out on the right side of those battles.

Garet Beal, Maine Athletic Club – A prototypical pick and pop 4 man, Beal stretched the defense with his long range shooting throughout the day.  Once establishing the jumper he also utilized a strong shot fake to get by his defender and finish in the lane.

Jalen Myrie, Mid Atlantic Select – The 6’2” point guard flashed major athleticism making plays above the rim at both ends of the floor.  He has a nice tip in on the offensive glass and followed it up with a loud rejection at the other end coming from the weak side and turning back a shot into the 3rd row.

Marcelo Deschamps, Maine Premier – He’s a guy who is flying a little under the radar now but is sure to get more attention as spring turns to summer.  The 6’10” Lee Academy product showed soft hands and soft feet in the lane finishing a number of jump hooks and short shots around the rim with ease.

Kevawn Lord, Westside Terriers – The Terriers came with 20 seconds of upsetting Expressions Elite and Lord was the main reason why.  He was unstoppable off the dribble and made a series of incredible, acrobatic finishes once he got to the rim.  His jumper looked solid the few times he flashed it but honestly he was so consistently deadly off the bounce that he rarely had to attempt an outside shot.

Myles Wright, Metro Boston – A swingman with the full gamut of physical tools, Wright put up a team high 21 points on Saturday night to lead Metro Boston to a big win.  Wright was proficient while attacking the rim and able to keep defenders honest with the threat of his jumper.