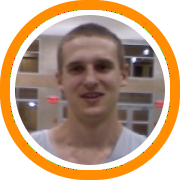 Nate Vernon, the 6'’5"” Suffield Academy sharpshooter ended his recruitment on Monday, as he called Assistant Coach Ryan Mee to commit to the University of Rochester.  Vernon picked Rochester over Bates, Middlebury, Trinity, and Elon.

Vernon told NERR, "“I visited Rochester over Thanksgiving break and I got a good feeling from the coaching staff and the players. My trip last weekend only reaffirmed this. Coach Mee did a great job recruiting me all season long, and he knows how well I fit in the Rochester system."”

Mee was one of the all-time greats in program history as he finished his four-year career ranked in the top 10 for three-point field goals made at the U of R. He played in two Final Fours (2002, 2005) during his career.

Vernon was one of the top three-point shooters in all of New England in his lone season at Suffield. On the year Vernon averaged just over three three-point field goals per game. He led Suffield with 78 triples on the season. Vernon is the second member of the Suffield's "big three"”to commit.

Just last week classmate Allen Harris signed his National Letter of Intent to St. Anselm's College while Xavier Pollard, Suffield'’s leading scorer, is yet to make a decision but is considering Winchendon, St. Thomas More, and Bridgton for a post-graduate year.