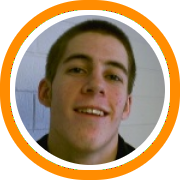 As for the players, the two marquee names certainly didn’t disappoint.  Within the first minute of action Lubick made a quick backdoor cut down the lane, caught a pass, and threw down a tremendous two handed dunk.  Two minutes later his frontcourt partner got into the act as Murphy knocked down consecutive three-pointers from the top of the key.

It was more of the same for the next hour and 15 minutes as the duo continued to shine.  To their credit neither player seemed to succumb to the pressure of playing in front of so many college coaches as both were unselfish throughout the workout and refused to force bad shots.  When it was all said and done Murphy had shown his ability to score on both the post and perimeter, as well as a much improved physique.  Meanwhile, Lubick’s athleticism was apparent to everyone in attendance, as was his ability to move without the ball and knock down shots from the perimeter with his super quick release.

But it wasn’t just Murphy and Lubick who were impressive today.  Pete Kaasila had the unenviable task of being matched up with Murphy throughout the day, but he made the most of his opportunity.  The physically strong big man showed his own prowess on the low block as he scored in a variety of ways while showing some top-notch footwork.  He also did well on the defensive end as he worked to limit Murphy’s touches by fronting him in the post and trying to muscle him off the block.

Dave Johnson, a 5’9” junior point guard who figures to be the most talented addition to this year’s team, fell victim to a very unfortunate set of circumstances.  Less then five minutes into the workout the quick point guard was driving through the lane when he was met with contact that sent him to the ground.  Unfortunately, when he got up it was apparent that he had suffered a broken wrist.  Johnson was obviously sidelined for the rest of the day but that didn’t stop his teammates and coaches from singing his praises following the conclusion of the workout.

Other players who stood out during today’s action included:  Russell Braithwaite who showcased his excellent strength and athleticism along with his ability to attack the rim and finish off the dribble; Jay Freeman who showed his skills with the ball in his hands; Brian Grossman who has an improved three-point stroke from a year ago; Melsahn Basabe who appears to be the next big prospect down the pipeline; and Colin Keane, a role playing guard who made one outstanding pass after another.

All in all, the workout was a terrific success for St. Mark’s.  Murphy and Lubick were able to showcase themselves to some of the top college coaches from around the country while a number of their teammates utilized the opportunity to prove that they have quite a bit of game themselves.