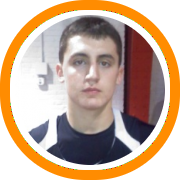 The SECC All-Stars held their second annual college night on Thursday, welcoming division III coaches from local colleges and universities to watch their u15, u16, and u17 teams go up and down.

The SECC All-Stars had tremendous success in their first year of existence, sending a whopping number of players to the next level in the class of 2010.  If Thursday night was any indication there is more of that to come in the future as the AAU program continues to feature many of the top players and prospects in Western Massachusetts.

Here is a look at who stood out on Thursday:

Alex Gartska, Westfield High School – He may be Western Mass’ top player next high school season with a full offensive onslaught of deep jumpers, dribble pull-ups, quick cross-overs, and crafty finishes in the open floor, all of which allows him to score in bunches.

Jake Laga, Longmeadow High School – Laga is a fundamentally sound player with a versatile skill set and good feel for the game.  He shoots it with range and also impresses with his ability pass and rebound from the perimeter.

Musa Elsir, West Springfield High School – Elsir looks the part with the frame necessary to play at the next level.  He showed a solid handle for a swingman during drill work and backed it up during game play while also showing the ability to stick the mid-range jumper.

Jared Neumann, Northampton High School – The sophomore has perhaps as much long-term potential as anyone in the program with a strong and still developing body, the strength to rebound and finish in traffic, and the skills to push the ball up the floor himself.

John Basile, Longmeadow High School – Another sophomore who will team with Laga to form perhaps the best one-two tandem in Western Mass next year.  Basile is a playmaker who is good with the ball, aggressive going to the rim, and versatile finishing with dexterity.

Ryan DiBernardo, Cathedral High School – The Cathedral sophomore was the most pleasant surprise of the night.  His feel for the game separates him from his peers as he has just flat out knows how to play the game the right way.

Brice McCallister, East Longmeadow High School – His upside is immediately evident as his physical tools give him a higher ceiling than most of his teammates, and he’s already made huge strides within the last year.  He definitely has a bright future.

Norris Cuevas, Central High School – Like McAlister, Cuevas is still just a freshman and he has an equally high upside.  He goes to the rim like a man and although his jumper was previously his Achilles heel, it is now vastly improved.

Joe Meade, Westfield High School – A six-foot-six big man who has a soft touch and good range on his jumper and the physical strength to go hard to the bucket and bang on the glass, Meade has the inside-out tools to blossom into a serious prospect.

•  Josh Bosworth (East Longmeadow) is still a baby physically but has noticeable upside
•  Sam Blake (East Longmeadow) has big time athleticism and a quick first step
•  Charles White (Amherst) is a quick guard who gets in the lane and makes plays.
•  Anthony Taylor (New Leadership) is an undersized, bouncy 4 who rebounds and finishes in traffic