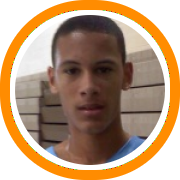 For the past two months Reebok has organized a series of work-outs for some of Boston’s top players.  Organized by Reebok Basketball Product Manager Justin Kittredge, the work-outs have taken place twice a week and lasted for two hours a session.  The first half of each session is dedicated completely to skill work, while the second hour was strictly for strength and conditioning.

Not only were there top notch players in attendance, but there was also a great group of high school coaches who participated.  In fact, each session was run by a different local coach as players had opportunities to learn from 10 of the best basketball minds in the region including:  John Carroll from Northfield Mount Hermon; Bill Loughney from Boston College High School; Malcolm Smith from East Boston High School; Jim Donnelly from Sutton High School; Jim Quatramoni from Hull High School; Paul Connolly from Newton North High School; Juan Figeroa from O’Bryant High School; Dave Fazio from Andover High School; Steve Cassidy from Charlestown High School; and Rick Patch from Seekonk High School.

Kittredge was quick to praise all twenty players saying they all improved significantly over the two month period.

“The basis of this was to get them ready for the season,” he said.  “But also to build leadership potential”

Big man Uche Egesionu was one player who thrived in that regard as he is said to have been the most vocal player in the work-outs constantly looking to motivate the rest of the group.

Romeo Diaz may have been the most consistently impressive player as he showed his versatile skill set throughout the entire process.  Diaz has excellent size from the perimeter, a soft shooting stroke, and a good mid-range game.

If Diaz was the most consistent player, Jarrell Byrd may have been the player with the most upside.  Despite being one of only three sophomores in attendance he really shined.
The Lynn Classical swingman has really grown into his body in the last year and is now almost unstoppable when attacking the rim.

Chris Flores drew praises from many of the high school coaches in attendance for his developing skill set.  Previously best known for his ability to make shots from the perimeter, Flores now features a diversified skill set which allows him to attack defenses off the dribble as well.

Another player who has shown great improvement is Tyler Patch.  The Seekonk star is now displaying a much improved three-point stroke in addition to a better first step which has helped him to break down his defender with more consistency.

Overall it was an outstanding experience for participating players and coaches alike as they both got an opportunity to brush up on their skills in preparation for the high school season.