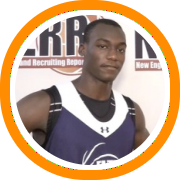 The New England Recruiting Report’s annual fall prep school swing began on Tuesday night with a trip to Wilbraham and Monson Academy, where we got an early glimpse at a program on the rise in class AA of the NEPSAC.

The 2012-2013 Titans’ team is an undeniably talented one, but the two things that really set this group apart are their size and youth.

With a frontline that includes Goodluck Okonoboh, Djery Baptiste, Kerem Kanter, and Marcel Pettway, it is hard to image that there will be another class AA team that can match up with this team up front as their combination of size, length, athleticism, and depth is truly staggering.

The potential defensive tandem of Okonoboh and Baptiste gives the Titans’ the New England version of the Twin Towers, with arguably the two most physically intimidating big men in the class, one of whom specializes in blocking shots and the other in cleaning the glass.

Pettway is coming off a big freshman season that saw him hold his own against some of the most established post players in New England.  Meanwhile Kanter, who is the younger brother of Utah Jazz forward Enes Kanter and coming off a stint with Turkey U20 national 20, appears to be the most versatile offensive player in the group.

While head coach Chris Sparks will obviously have a ton of weapons to work with in the frontcourt, the backcourt is no slouch either, beginning with the arrival of Luis Monteiro.

The six-foot-seven guard made his New England debut last month as the Scott Hazelton Basketball Camp after arriving from the Dominican Republic and continued to show off his tremendous long term potential on Tuesday night with a few signs of incredible natural talent.

Springfield native Kamali Bey returns for his senior season while the backcourt will also get a boost from another familiar face in Durfee transfer Curtis Cobb, who should pace the team’s attack behind the three-point line.

Post-graduate Kevin Perez is a newcomer from New York who appears ready to handle important minutes, while back-up point guard Earl Stephen is just the type of dependable floor general that championship teams love to bring off the bench.

Lastly, keep an eye on freshman Arkel Ager, a powerful six-foot-five swingman from Connecticut who appears poised to be among the region’s premier prospects in the class of 2016.

While the sheer talent of this club is certainly enough to get excited about, perhaps the most staggering characteristic of this club is just how young they still are.   With just two notable contributors in the class of 2013 (Bey and Perez), this is a group that could potentially keep their core intact for years to come, and that means there could be a new rising power in Class AA.