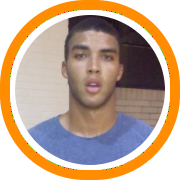 Wilbraham and Monson Academy has steadily raised the level of their basketball program since former division I assistant coach Chris Sparks returned to the helm of his alma mater’s program, culminating with a trip to last season’s Western New England finals.

This year the program boasts their most talented roster yet featuring a balance of players from New England and beyond.  But with their enhanced talent comes a steeper challenge than ever before as Wilbraham & Monson will compete in the newly formed class AA this season along with teams like Worcester, Tilton, St. Mark’s, Marianapolis, St. Andrew’s, Brimmer & May, Hotchkiss, Lawrence, Cushing, Kimball Union, and others.

One of Wilbraham’s biggest assets in that challenge will be a potentially devastating one-two punch up front featuring their two most notable newcomers from outside the region, Enosch Wolf and Braeden Anderson.  Wolf is a seven-foot-one German import who is already committed to UConn while Anderson is an exceptionally athletic six-foot-eight power forward who is also being recruited by schools from the highest level.  In addition to being high level prospects, the duo also compliments each other very well as Wolf’s combination of size and skill and Anderson’s explosiveness will force opposing defenses to pick their poison.

The backcourt will feature a variety of familiar faces beginning with Andrej Pajovic, last year’s starting point guard who returns to run the show as the floor general.  A pass first point guard with a high basketball I.Q., Pajovic plays an efficient brand of basketball and should be at his best this year surrounded by so many scorers.

On the wing, those scorers will be headlined by a trio of local products in Jules Tavares, Kamali Bey, and Jaylen Brantley, all of whom are Massachusetts residents who transferred into the local prep school this year.  Tavares is an explosive athlete who creates his own offense and gets to the rim at will while Bey is another high volume scorer who should be able to step right in upon his return from injury.  Brantley is the most versatile of the bunch, able to score with his lethal outside jumper and slippery handle but also a pure point guard in his own right who will give Wilbraham the flexibility to play with two lead guards on the floor together at the same time.

Xavier Braham will be Brantley’s counterpart in the frontcourt in that he is extremely versatile, able to impact the game in a variety of different ways, and play several different positions.  With good size and a strong game facing the basket, Braham’s presence gives the team the option to go small with him at the four or very big by putting him at the three.

This year’s squad also possesses a good deal of depth and experience off the bench, two non-negotiables for any hopeful title contender.  Six-foot-seven Adam Schrecengost and six-foot-eight Austin Pinckney are two post players who would see starting roles on most other teams in the league.  Both have nice skill packages with their back to the basket and provide physical presences inside the paint on the defensive end.  Scott Watson and Mike Mendes will play important roles in the backcourt.  Watson is one of the most hard-nosed and tough players around while Mendes could be an instant offense type player off the bench with his ability to score points in bunches.

While there are plenty of veterans on this year’s squad, Coach Sparks is also building for the future as the squad features a variety of young talent.  While the perimeter trio of Brantley, Tavares, and Bey will all have multiple years in the Wilbraham red and white, they will be joined by two other Massachusetts products in six-foot-four forward K.J. Baptiste, and six-foot-five super skilled swingman Joey OConnell.

When you put all of the pieces together the Wilbraham and Monson program not only has the size, depth, and talent to be contenders this year in class AA but they have a terrific bridge to the future with a talented group of young impact players.