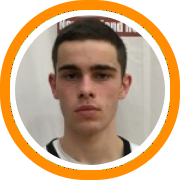 There is no denying that Vermont Academy is the favorite in Class AA of the NEPSAC but as we’ve seen, absolutely nothing is a sure thing.

So who else then is poised to challenge in AA of the NEPSAC? The answer begins in Tilton, New Hampshire with the league’s most storied program.

While the Rams have hardly remade their roster with a plethora of transfers and post-graduates, they  have made a few strategic additions that are sure to upgrade their program.

Perhaps the most notable improvements though are the ones made by their returning players as head coach Marcus O’Neil has raved about the summer gains of Marcus and Max Zegarowski as well as Ryan Layman.

Marcus Zegarowski put up some huge scoring numbers for Tilton last year, especially down the stretch of the season. While his skill set has continued to emerge, so too has his approach as a floor general. O’Neil has praised the court vision his junior point guard has displayed all fall while also praising his focus and concentration. To be sure, Zegarowski’s competitive edge is as sharp as anyone’s in New England and now that he’s an upperclassmen he’s ready to take on an undeniable leadership role here.

His twin brother, Max Zegarowski, might be the most improved returning player on the team though. Physically, he’s grown to about 6-foot-7 while also started to cut-up his frame. He’s running the floor well and making various flip shots around the rim but where he really differentiates himself though is behind the three-point line as he has developed into one of the most consistent spot-up shooters in the class.

Senior forward Ryan Layman also appears to have made nice strides in his game since last year. Coming off a relatively quiet summer, the Massachusetts native made an early commitment to Bryant and the Bulldogs might have found themselves a diamond in the rough. Layman is the type of open floor athlete you don’t typically see in the NEC, especially at 6-foot-7, and when he’s stretching the floor consistently it is clear just how high his long-term ceiling is.

Terrell Brown may be new to the Tilton program, but he’s certainly no stranger after spending the last four years at St. Andrew’s, and he too has made vast strides since the last prep season. An early Pittsburgh commit, Brown finally started to turn potential into production during the recent EYBL season and the scary part is that he might only be just scratching the surface of his potential if he can continue to ride that wave of momentum given his size, terrific frame and soft touch all the way out to 20 feet.

The team’s other most notable newcomers all come north of the border. Jalen Butler, a 6-foot-1 combo-guard, was particularly impressive the day we were in the gym. A well-built southpaw, Butler can both probe a defense with his dribble while also stretching the floor behind the arc. He may be most impactful on the defensive end of the floor though and could wind up being the Rams’ best perimeter weapon on that end.

Rob Birstonas, a 6-foot-4 swingman, wasn’t in the action the day we watched open gym, but both he and 6-foot-7 big man Jonathan Socaczevski are expected to make consistent contributions off the bench this season.

Eric Beckett is a 6-foot-3 sophomore but is multi-talented offensively and capable of providing an immediate boost on the offensive end with legit shooting range and a crafty assortment of pull-ups and hesitations off the dribble.

Of course, this team also has the leadership of Marcus O’Neil, the head coach who has more NEPSAC titles to his name than every other coach in the league combined, who is sure to mold these individual parts into a cohesive unit by the time the heart of winter arrives.

Tilton opens their 2016-2017 Sunday at the National Prep Showcase as they take on NTSI from Pennsylvania and follows with match-ups against AAA foes New Hampton and Northfield Mount Hermon in the following week.