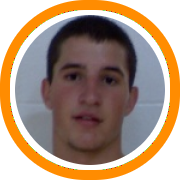 Oriakhi anchored Tilton on the glass and the defensive end of the floor during their championship season last year.  After watching Tilton’s run on Wednesday it became apparent that he should have an increased opportunity to be equally dominant on the offensive end of the floor as well this year, as his teammates were looking for him in the post and making an effort to play inside-out.

Wednesday’s workout also showcased many aspects of Oriakhi’s game that may be underestimated.  While his power, athleticism, and ability to dunk virtually every ball inside the paint is well known, few people realize how skilled the big man actually is.  There was no doubt Wednesday as he showed sound footwork in warm-up drills, knocked down 11 of 20 three-pointers from the top of the key showing a mechanically sound stroke, and showed his jump hook to be equally effective over either shoulder during the open run.

Oriakhi’s counterpart Jamal Coombs put up huge numbers last year as the team’s leading scorer, but his biggest value on this year’s team should be his versatility.  He is certainly capable of filling it up at any point but now that he is surrounded by both Oriakhi and Coleman he can also act as more of a distributor and create shots for his teammates.  Defensively, he will be capable of guarding all five players on the floor on most nights while also being his team’s second best rebounder.

If Tilton has a game that goes down to the wire this year and head coach Marcus O’Neil needs a bucket, don’t be surprised if Gerard Coleman is his first option.  The kid can flat out create his own shot and score the ball at virtually anytime.  He is super smooth and when he’s at his best he has the nicest mid-range game in New England.  UConn head coach Jim Calhoun and Louisville head coach Rick Pitino are both expected to be in the Tilton gym in the near future to get a look at the talented two-guard.

While the “big three” will give Tilton a huge advantage over the rest of Class B, if they are going to repeat their championship run they will need productivity from their supporting cast.  Point guard Scott Tavares looks poised for a big year at the point.  We were impressed on Wednesday by how far his game has already come in the very short time he has been on campus.  He was playing under control, making the high percentage play, and in so doing becoming even more dangerous to make plays off the dribble whenever the defense presented the opportunity.  Dominic Harris, a 6’5” forward, could potentially be the fifth starter.  Although he is currently out of action with a shoulder injury his size, toughness, high basketball I.Q., and ability to make open shots should prove to be very useful.

That leaves Chris Barsanti, Alex Krenshaw, Sam Malone, Matt Gaither, and Georges Niang as the primary contributors off the bench.  Barsanti is a solid catch and shoot player who should see plenty of open looks playing with the big three.  Krenshaw and Gaither will both bring a toughness and willingness to do the little things necessary to win.  Meanwhile Malone and Niang are two talented sophomores who will form a nice inside-out tandem for years to come.

One thing is for certain, Tilton will certainly have an X on their back throughout the entire season.  And while they will be the most talented team in Class B they will need to bring their A games every night as programs like Marianapolis Prep, Cushing Academy, Proctor Academy, and St. Andrew’s are all hoping to take their crown.  Nevertheless, this may not be the year to bet on an upset.