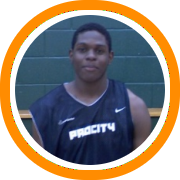 Continuing our look at the contenders in Class B of the NEPSAC, today we focus our attention on Proctor Academy.  Head coach Gregor Makechnie returns the vast majority of his line-up from a season ago, when Proctor was one of the top five teams in the league.

This year the returning core will be supplemented by two highly talented Canadian imports in the junior class, Grandy Glaze and Kevin Thomas.

Glaze may be the team’s most effective player, he has a virtually unrivaled appetite for the game as he plays with great energy and power.  He can be reminiscent of Charles Barkley the way he bulldozes his way to the rim and dominates the glass, and projects to be the most dominating physical presence in Class B.

Thomas is no slouch himself.  With a powerful body and an emerging skill set he should be productive both inside and out.  He will simultaneously give college coaches plenty to be intrigued by since he has a plethora of tools and is really just beginning to learn to utilize them.

Prince is a powerful lead guard who will be able to overpower most, but is also a step quicker than last season, after shaving 15 pounds from his frame.  He will be the primary playmaker for this team and should be able to consistently create shots for himself and others.

Bartoldus had a good summer for the Granite State Jayhawks.  He was the team’s first offensive option and he produced, putting points on the board on a consistent basis.  That experience should serve him well coming into his senior year as he will be able to finish on the break and make open shots.  But Bartoldus’ main value is being able to do a number of little things to impact the course of the game.  He defends well, rebounds, gets defensive deflections, and always plays hard.

Pat Donnelly will anchor the paint inside.  The burly power forward has a nice array of low post moves in his arsenal but is also skilled enough to step out to the three-point line.  The two sport star is still considering his options for the next level, but there is no doubt he will be an extremely productive interior force this year in Class B.

Amir Tarif could also contend for the starting line-up.  Tarif is a six-foot-six power forward with a strong body.  He impressed us this summer with his ability to score with his back to the basket but has always preferred to prove his prowess facing up.  While his perimeter skill set is impressive for a player of his size, the New York native is a scholarship level product when playing inside out.

R.J. Stephens will likely be the first guard off the bench.  The quickest player on the team, Stephens could play a variety of roles for this group.  He’ll spell Prince at the point, provide a secondary ball-handler, potentially be the team’s best perimeter defender, and be able to make open shots when defensive rotations leave him unchecked on the perimeter.

Proctor Academy opens their season tomorrow with a game against Wilbraham and Monson at the National Prep Showcase in New Haven, Connecticut.  Hopes are high coming into the season, as this is the most talented team Proctor has had since they went to the Class B final in 2006.  Chemistry will also work in this team’s favor as five of their top seven players return for a second season while a separate five all played together this summer on the AAU circuit.