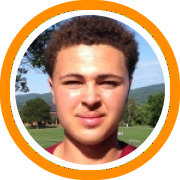 With a NEPSAC AAA title in 2012 and the National Prep Championship in 2013, there’s no denying that Northfield Mount Hermon’s basketball program has achieved national status like never before.

But that success comes with a price as NMH faces the burden of expectations coming into the upcoming season, albeit with a roster that is both the youngest in program history and by far the youngest in AAA this season.

Sem Kroon and Victor Udoji are the only seniors on the roster while Jase Harrison is the program’s only post-graduate.  While Kroon, who recently made a verbal commitment to Yale, is coming off a breakout summer and playing the best basketball of his life, it is clear that for this group to be successful they’ll need their underclassmen to grow up quickly.

Sophomore guard Ian Sistare might be the best example. The New Hampshire native saw consistent rotation minutes last year as a freshman, and already appears poised to take on a leadership position this season.

His likely running mate in the backcourt will be junior point guard Daquon Ervin, another young guard who is now ready to take on a more prominent role after seeing consistent minutes in the team’s rotation last year.

One player who looks poised for a huge season is St. Mark’s transfer Aaron Falzon, who will have an opportunity to be one of the team’s primary offensive weapons this season.  Historically considered to be a face-up four type player, Falzon will also have an opportunity to slide over and prove himself at the three spot this year thanks to the team’s size and depth up front.

Fellow junior Josh Sharma is another major weapon up front and likely the team’s best long term prospect.  The athletic seven-footer is known for his ability to make high level plays around the rim, and with those moments now coming more frequently, NMH is hoping that Sharma will be able to put it all together on a consistent basis this season.

Two other returners who will be looked upon to provide both production and leadership will be junior big man Collin McManus, who had a breakout summer of his own, and junior point guard Jashanti Allen, who returned to NMH this fall in the best shape of his life.

Jackson Donahue may technically be in his first season at NMH but it seems as if he’s practically a veteran after watching his brother, Sam Donahue, in the last two seasons.  His AAU teammate, A.J. Brodeur, is another newcomer who will be expected to make significant contributions in his first year in the program.

Another newcomer to keep an eye on is junior Chris Sullivan, who fits the high academic pedigree that NMH is known for but differentiates himself from the rest of the roster with an absolutely tremendous motor and an outstanding defensive game.

Freshman Jerome Desrosiers has already announced his arrival in a big way with his performance at the recent Elite 75 Frosh/Soph Edition, but that might just be the tip of the iceberg as the Canadian native will definitely be one of the top 9th graders in New England this season.

Another underclassman on the roster is sophomore Nick Seretta, who has made significant strides since last year in working his way up from the J.V. team as a freshman.

In total the rosters include one post-graduate, two seniors, seven juniors, three sophomores, and a freshman.  Whether or not that’s enough age and experience to live up to the expectations from years past remains to be seen, but there’s no denying that this is an NMH squad that has a plethora of depth and talent alike.