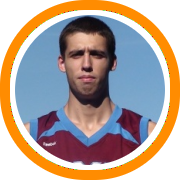 Not many prep school programs work quite as hard to establish a brand as does Northfield Mount Hermon.

For several years now head coach John Carroll has worked to portray his program as “the best combination of academics and basketball in the United States,” as it states in the opening sentence of the introductory letter to college coaches this year.

While the claim could once be construed as fairly bold, NMH now has the numbers to add support.  Of the 26 NMH alums playing college basketball this year, 11 of them are in the Ivy League, more than any other school in the country.

The 2010-2011 team sent all seven of their 2011 products on to the division I level: two accepted scholarships (Aaron Cosby to Seton Hall and Vince Van Nes to Fairfield); four chose the Ivy League (John Golden & Jvonte Brooks to Dartmouth, Joe Sharkey to Brown, and Armani Cotton to Yale), and one accepted a recruited walk-on position (Ethan Mackey to Maine).

While the academic/athletic theme has been a consistent one at NMH over the years, the team’s on-court identity has varied from year to year.  The 2009-2010 squad was one of the best outside shooting teams in the country while last year’s club was a longer more athletic group.

If this team’s club could to be characterized by anything it could be their intelligence.  Collectively they have a very high basketball I.Q. which is immediately evident even in their first week of open gym workouts.

Leading the way is Harvard bound Evan Cummins, one of the smartest power forwards you will find in New England.  Dartmouth bound forward Tommy Carpenter is also extremely crafty and savvy.

The most dominant player in the open gym we watched was Connecticut native Ethan ODay, noticeably stronger than he was just six weeks ago in July and clearly playing with a lot of confidence right now.

If O’Day emerges as the leading scorer along the frontline his perimeter counterpart might very well be Ryan Oliver, a big guard from California who missed his senior year with a knee injury but looks healthy now, stroking long jumpers and bouncing up to play above the rim.

The most improved player on Northfield’s roster could be junior big man Dekeeba Battee.  After returning home for the summer, the Australian native has come back to New England with a more powerful body and smoother skill set.

Battee and Dallier are the tip of the iceberg when it comes to an especially strong junior class that also features Massachusetts native Pete Miller, sharp-shooter Skyler White, and the backcourt tandem of Will Defanti and Sam Donahue.

Sophomore Victor Udoji and freshman Jashanti Allen are the resident youngsters on board while senior big man Lucas Van Nes is the team’s X factor, owning size and power that no one else on the roster can duplicate.

All in all it looks to be a promising year of basketball at Northfield Mount Hermon as Carroll’s group will again feature a blend of athletic and academic talent with a style of play which will be reflective of their program’s image.