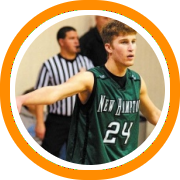 In the two years that Pete Hutchins has been at the helm of the New Hampton program, his teams have developed a reputation for playing one of the most competitive schedules in the country.

In no uncertain terms New Hampton will play anyone, anywhere, at any time.

Last season Hutchins and his team were almost penalized for their strength of schedule by not being eligible for the post-season NEPSAC tournament.  With the only requisite for entry being a .500 overall record, New Hampton was not eligible while others with a far less ambitious schedule (and far worse conference record) made the cut.

This season the rules have changed with reportedly all 10 Class A teams guaranteed a spot in the post-season.  That’s good news for New Hampton and potentially bad news for the rest of the league as Hutchins’ squad was clearly among the most dangerous in the conference at the end of February last year.

This season the third year coach brings in perhaps his most talented group ever, and apparently his most driven as well.

“I love my guys,” Hutchins told the New England Recruiting Report when we visited his gym in late September.  “They love being in the gym and are all working hard to get better.”

Fans of New England basketball may also love this year’s New Hampton team as there is a distinct local flavor to the group.

Michigan bound forward Evan Smotrycz returns for his senior season having solidified himself as a consensus top 100 player in the country.  He’ll be joined by his Mass Rivals teammate Jordan Laguerre, a repeat junior from Trinity High School, and post-graduate Dartaye Ruffin, who comes to New Hampton by way of Stoughton High School in Massachusetts.

Smotrycz and Laguerre will be two of the team’s most potent scorers.  Smotrycz proved he was capable of hanging with the best scorers in Class A last season and with the added benefit of a year’s experience and development he should be poised for a big season.

Laguerre’s first year experience may prove to be fairly similar to Smotrycz’.  An equally talented, but different type of player, Laguerre will have to adjust to the enhanced level of competition, but once he does there is every reason to believe that he’s going to end up being a big time producer for this team.

Ruffin may not score as many points as his two New England counterparts but his role will be no less important.  The Drexel bound power forward is among the region’s most under-rated players and that’s because so much of his value doesn’t show up in the stat sheet.  He’s a tremendous defensive player, not because he blocks an overwhelming amount of shots or picks up a ton of steals, but because he can guard practically anyone on the block in single coverage and is one of the quickest rotating big men you’ll find.  He’s equally good on the glass and has a much improved offensive game from a year ago.

Likely rounding out New Hampton’s starting five are Boston College bound point guard Brady Heslip and forward Kyle Cain.  Heslip is a Canadian native who is absolutely tough as nails and a great three-point shooter.  His leadership running the team will be instrumental as his tenacity instantaneously sets the tone for the rest of the team.  Cain is a high flying forward who is at his best running the floor and finishing plays in transition.  He’s a highlight reel waiting to happen and will no doubt provide New Hampton fans with plenty of excitement throughout the season.

New Hampton’s bench also appears to be an asset for Coach Hutchins.  While he may not have an endless list of mid-major players at his disposal, what he does have is an overwhelming amount of tough, over-achieving kids who won’t back down from anyone.

Perhaps no one better exemplifies this than forwards Jacob Liebert, who is headed to Navy next year, and two sport star Eric Dean who is a step quicker since this summer with a leaner frame.

Beau Gamble, a heady floor general with a great feel for the game, and Carter Trent, a sparkplug point guard with an endless motor, will both see time backing up Brady at the point while junior Steve Topercer could potentially see time in either backcourt position.

Thomas Bropleh, a powerful and pretty skilled combo-forward, will provide a scoring boost off the bench along with Massachusetts native Tim McKinney who certainly looked fully recovered from last year’s injury when we visited the New Hampton gym as he was consistently slashing to the basket and making plays with his dribble.

Ultimately, this New Hampton roster was constructed with an eye towards competing in the NEPSAC.  Their starting five is as talented as anyone’s with ample scoring punch coming off the bench.  Most importantly they have a slew of tough kids who push each other every day, want to get better, and won’t back down from anyone during the course of the season.

Those types of players fit in well at New Hampton where Coach Hutchins squads take on all comers, and end up the better for it.