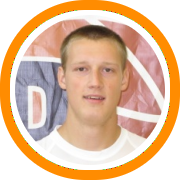 At this time last year no one was predicting that Maine Central Institute would go on to win the first ever NEPSAC class AAA championship.

To be sure, no one ever looks forward to playing a team coached by Dave Campbell, but conventional wisdom said that while MCI would undoubtedly be one of the most disciplined teams in the NEPSAC, they just lacked the sheer talent to win the whole thing.

After taking on all comers in the regular season, MCI entered the NEPSAC tournament as the fourth seed and then knocked off fifth seeded Northfield Mount Hermon, top seeded Brewster Academy, and third seeded New Hampton to clinch the inaugural NEPSAC class AAA title.

Five months after that thrilling victory at Endicott College, Campbell returned to his gym at MCI and welcomed not one familiar face on his 2011-2012 team.  Even assistant coach Jeff Schoenle had moved on to the college ranks.

What remains is Campbell and his no-nonsense approach, that has annually allowed his teams to become more than the sum of their parts, culminating in last year’s championship.

So while this team may not be the most talented in class AAA, they certainly have the personnel to be dangerous.

First and foremost they have size to contend with anyone up front.

Tobe Okafor is a six-foot-ten center from Nigeria who is stopping at MCI before playing for one of Campbell’s predecessors, Max Good, now the head coach at Loyola Marymount.  A high level athlete with a ton of physical tools, Okakor has made dramatic improvements to his game already and figures to make an impact on both ends of the floor this season.

Six-foot-nine power forward James Farr is the team’s most talented player.  He is one of four New England prep school products who is already committed to Xavier in the class of 2012, but before he teams up with the likes of Myles Davis, Semaj Christon, and Jalen Reynolds, he’ll first try to get the better of them as MCI takes on Notre Dame Prep and Brewster Academy among others this year.

Jean-Pierre Charles gives Campbell another prototype, as a long and athletic hybrid type forward, giving the team plenty of versatility in terms of their frontcourt combinations.

Jared Brandon, a slashing six-foot-five forward who is already committed to Cal State Fullerton, and Sean James, a stocky and strong skilled forward from Delaware will also see time at both of the forward positions.

The backcourt can be characterized by a single word, shooters, and that’s just the way Campbell likes it.

Dustin Smith, Joey Boyle, and Dylan Leazier were all out of action the day we visited the MCI gym, but word has it all three of them find the bottom of the net with regularity as do Peter Zannes-Fatland and Casey Perrin, a hard-nosed point guard from Phoenix.

Maine native Tristan Thomas rounds out the roster, and the six-foot-three swingman could be on the verge of a big season.  True to form, Thomas could be the best pure shooter on the team.  He also may be the hardest worker, and that’s saying something with this group.  What we know for sure is that his work ethic is obviously paying off.  We’re not afraid to call him one of the most improved players in New England’s and Campbell went a step further, calling him a division I prospect.

To put it plainly, Thomas is Campbell’s kind of player, and he’s not alone as most of his teammates fall under that heading as well.  Six months ago, MCI took a group of similar players and turned them into New England champions.  Six months from now, they will attempt to do it again, but they certainly won’t sneak up on anyone this time around.