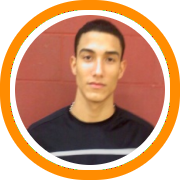 The Lee Academy post-graduate basketball team is under new leadership and Andrew Papaefthemiou has put together one of the most talented rosters the school has seen.

It all begins with Anthony Joseph Perez Cortesia, an incredibly skilled six-foot-nine Venezualian import who was recently profiled by ESPN and promises to be one of the best kept secrets in the national class of 2012.

Perez Cortesia is just the beginning of what is a very talented young international nucleus at Lee.  Jean Yves Toupane is a long and athletic swingman who knows how to put the ball in the basket.  Toupane made his American debut last year at the Jordan International game after taking MVP honors at the NBA’s Basketball Without Borders program in Africa.

Rodell Wigginton is a Canadian native who comes to Lee by way of Boston Trinity where he played last year after making his debut at the 2009 New England Elite 75 Showcase – Frosh/Soph Edition.  Wigginton was particularly impressive the day we were in the Lee gym, showing not only his trademark athleticism but also making noticeable strides in the development of his perimeter skills.

Six-foot-four sophomore guard Arturas Makoskis is a Lithuanian native who may not be ready for much action on the post-grad team this year but projects as another important bridge to the future for Lee.

Beyond the tremendous young talent that Papaefthemiou has to build around moving forward, Lee also has quality depth in the class of 2011, especially along the frontline.

Keith Coleman returns from last year’s squad to offer a physically dominant presence in the paint with a terrific build, the ability to out run opposing bigs from rim to rim, and the bounce to finish and rebound above the rim.

Youssou Ndoye and Thanos Thodos offer two more talented international prospects up front.  Ndoye, a native of Senegal, has a particular high upside once he develops his raw potential while Thodos is a Greek big man who is already committed to the Cal-Irvine.

Chen Cai is the latest Chinese product to arrive at Lee and has good potential in his own right thanks to his 6’8” 240 lbs build and nice shooting stroke from the perimeter.  Canadian native Tyler scott is yet another international prospect in the class of 2011.

The post-graduate class also features a strong local contingent with several players from New England.  Scituate graduate Rodney Beldo will be of the utmost important to this year’s team as he will serve as one of the primary playmakers and contend for the starting point guard position.

Ben Teer and Koang Thok, two products of Maine’s high school system, also figure to contend for minutes in the rotation while Thok, in particular, has taken his recruitment to new levels since arriving at Lee.  Darius Sealy and Cesar Castro are two Massachusetts natives who come north by way of Cambridge and Chelsea.

The 2011 class also features D.J. Peterson, a versatile six-foot-five swingman from Minnesota who can play multiple positions in the backcourt, six-foot-seven forward Raymond Chase from Texas, shooting guard Will Durr from New York, and Fred Goss from California.

When you put all the pieces together you find a program that has some of the best young talent in New England, perhaps the best collection of international talent around, and arguably the most talented Lee Academy squad we have seen yet.