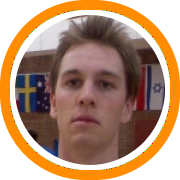 With players from five different countries represented on their basketball team the Lee Academy gymnasium is appropriately decorated with several different national flags.  The Chinese flag is front and center as this year’s Lee squad features three juniors who have recently come over from China.

The basketball team isn’t the only part of Lee Academy that has a close connection to China.  In fact, the school itself is set to open five new campuses in the Asian country.  The first is already up and running in Wuhan, a “small city” with 9 million people located about two hours south of Beijing.

Consequently, it is a good bet that the three Chinese players currently on the Lee Academy roster will be the first of many.  Making the story even more interesting is the fact that these three kids are all very good basketball players.  In fact, two of them are said to have a legitimate chance at making the Chinese national team that will play in the 2012 Olympics.

7’2” center Steve Sun, 6’9” power forward Jason Sun, and 6’7” small forward Justin Zhao give first year head coach Jimmy Graffam a terrific frontline for the next two years.  Steven was sidelined with an injury last week and so we did not have the opportunity to see him go up and down, but we can tell you just by watching some basic conditioning drills that not only does he have good size, but he is also plenty agile and coordinated.  Jason and Justin are still adjusting to the physicality of the American game but both figure to be important contributors right away this year.

Australian native Rhys Murphy is another international talent who figures to be the team’s most widely recruited player in the class of 2009.  The skilled forward already owns a scholarship offer from Oregon State and has had both Davidson and Butler in to see him in the first week of the contact period.

Israeli Samer Jasser returns to Lee for a second season and appears ready to pick up right where he left off as a prominent rebounder and the team’s defensive leader.  David Hanson, the son of UConn’s third all-time leader scorer Tony Hanson, is a native of Great Britian who should see some time in the Lee backcourt.

But there is also plenty of local American talent on this roster as well.  6’4” swingman Timothy Johnson, 6’6” swingman Mike Smith, 6’0” point guard Jonathon Marsh, 6’3” swingman William Barber, and 6’3” guard Breen Weeks are all ’09 products who figure to play important roles this year.  This will be Johnson’s second year at the school and he should thrive in the up and down system.  Smith is a big and strong player who can make open shots and play multiple positions.  Marsh is a talented offensive player who appears to have the leg up on the starting point guard job.  Barber had a very impressive day when we were in the gym utilizing his athleticism to make plays on both ends of the floor.  Weeks is the typical hard-working role player who doesn’t do any one thing to wow you but just seems to be on the winning team in virtually every game.  Luis Medina, Tade Ogunbona, and Alex Thomas should also contend for playing time.

The junior class includes 6’7 forward Maxie Esho, 5’7” point guard Jerrell Antley, and a big name from New York in 6’2” guard Winston Graham who ran with the New York Panthers AAU club this summer.  Graham arrives at Lee with a reputation as a shooter, although he was very productive off the bounce during the workout that we watched.

Despite being located in Maine, Lee Academy is not part of the NEPSAC.  Nevertheless, they face many local NEPSAC teams throughout the course of the year.  A word of advice to those opponents…don’t overlook this group because although you might not  recognize the names on the roster, it may just mean they’re from another country.