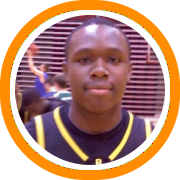 It was less than two years ago when Phil Pressey was wearing a Cushing Academy jersey.  Just a sophomore, Pressey was already one of the top players in New England and the future looked incredibly bright in Ashburnham.

But following his sophomore year Pressey made the decision to transfer to the Episcopal School of Dallas to be closer to his mother and Cushing was suddenly left without their star.

After going through some growing pains last season, this year’s Cushing Academy team looks poised to regain their place among the perennial contenders in Class B.

Domonique Bull begins his third year at the Academy and appears ready to take the next step in his development and take on that starring role for this year’s team.

Traditionally known for his prowess attacking the rim off the dribble, Bull has been earning rave reviews with his three-point shot this fall.  He reportedly made 42 of his 62 attempts during the fall AAU season with his BABC team and has been equally impressive during Cushing open gyms.

“He has put in a ton of time working on his jump shot and he is beginning to see the benefits,” said head coach Barry Connors.  “He is really shooting the basketball well right now and if he starts doing that consistently…forget it.”

Bull has also put on ten pounds of muscle this fall and now boasts a complete, and diversified, offensive attack.

Kennedy will form one half of a very imposing interior duo with newly arrived Egi Gjikondi.  The six-foot-eight center put up huge numbers at Malden High School last year and could be poised to do the same this year at Cushing.

Bull, Kennedy, and Gjikondi give Cushing arguably the best starting frontcourt in all of class B, but if this year’s Cushing Academy team is to challenge for a championship, the backcourt will be the key.

Jared Johnson figures to get the start at the shooting guard position.  For all of the hard work that Bull has put in this fall, Johnson has been right next to him, bulking up his own frame and improving his own shooting stroke.

Ironically, the key to this year’s team is a player whose future lies on the football field.  Rob Hollomon is a post-graduate who has been turning heads on the gridiron this fall in preparation for his college career.  But before his college football career begins, Hollomon will run the point for the Cushing Academy basketball team and if the Penguins are to have a successful season they will need the former Pennsylvania All-State product to play a big role.

Coach Connors’ second unit will be led by David Hastings.  An undersized interior player, Hastings is a two time captain and team MVP who has been the consummate team player over the course of his career.  Also ready to contribute is Tom McDonald a guard who plays hard, has a good understanding of the game, and a very consistent shooting stroke.

With Cushing’s ten man roster being comprised of one post-graduate, two seniors, one junior, three sophomores, and three freshmen, experience will clearly not be in the Penguins favor this year.  But there is no better tradeoff for a lack of experience than top talent and this year’s Cushing Academy team certainly has plenty of that.