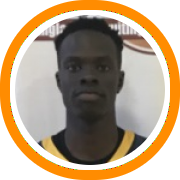 Now in his second year in New England, the seven-foot-three sophomore was rumored to be headed north of the border this year but when he returned to Cheshire it made them an immediate contender.

Upon his arrival last year, he wowed everyone not just with his size, length and consequent ability to protect the rim, but also with his touch on the offensive end of the floor and the ease with which he ran the floor and covered the court at his size.

For those who haven’t seen Marial since the end of last season…prepare to be amazed again…because he has improved and improved significantly.

He’s not just the best one-man zone defense (i.e. shot-blocker) in New England, but offensively he’s almost a brand new player. He’s showing that soft touch more, not just facing the basket, but also turning both shoulders in the post. Most importantly, he’s gotten more assertive. He’s looking to dunk everything around the rim and that means he’s throwing it down frequently and ferociously.

While Marial is an absolute game changer on both ends, he’s far from a one man show for head coach Kevin Kehoe. The Allen brothers – senior Jeff Allen and sophomore Justin Allen – are both back giving The Fighting Cats two more scholarship prospects to rotate along the frontline who create match-up problems with their inside-out tools.

Kehoe has also brought in a series of post-graduates to help secure the perimeter rotation with Elijah Pemberton having moved on to Hofstra, Ray Jerome to Penn and Clayton Le Sann to Holy Cross.

The most important newcomer is a familiar face in Fairfield Prep alum Rich Kelly, who had a huge final season in the CIAC followed by a similarly successful summer. Kelly provides Cheshire with something they didn’t have all of last season, a pure point guard, and that’s going to make the game infinitely easier for Marial and everyone else on the roster.

Jairus Stevens, Deng Nhial and Nik Nehls have all generated division I interest this fall as well. Stevens is a 6-foot-5 swingman from Indiana who comes from very good stock as his father, Barry Stevens, previously starred at Iowa State before playing in the NBA.

Nehls is the younger brother of Austin Nehls, who spent a post-graduate year at Cheshire two years ago before signing with Central Connecticut. Like his older brother, Nehls is known for his prowess from behind the three-point line, but may have even more versatility to his game.

Nhial, a 6-foot-4 swingman who is originally from the Sudan, has been perhaps the most pleasant surprise on this year’s team as he’s shown a solid skill level to match his length and high activity.

Put it together and Kehoe has a very strong eight-man rotation on his hands. There’s a star in the middle, a very steady point guard to run the show and quality depth both at the forward and wing spots to protect against injury and foul trouble. In other words, this is a team that is capable of beating anyone in the coming season.