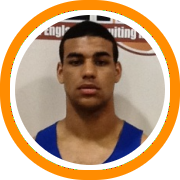 As you walk into the gym, the banners on the wall tell you all you need to know about the history of Bridgton Academy basketball.

After claiming the NEPSAC’s highest honor four times in a five year span, the challenge changed for Bridgton Academy head coach Whit Lesure back in 2010, and he has been forced to try and make more with less ever since.

Lesure’s teams have overachieved in that span, but the 2012-2013 season will present their greatest challenge yet.  This year’s Bridgton Academy team will be far different from Wolverines squads of the past.  There are no high-major prospects on this year’s team.  In fact, as of September, there wasn’t a player on the roster currently holding a division I scholarship offer.  There are no players above six-foot-six, and even he may be closer to six-foot-five.

No, this year’s Bridgton Academy squad isn’t likely to be chasing championships this season.  Instead, they’ll be fighting to stay competitive in a Class AAA that remains the most talented prep school league in the entire country.

What will remain the same in Bridgton is the man on the sidelines, and Lesure isn’t about to start making excuses.  You won’t hear him talk about some obvious philosophical changes that have gone on at the school or show any less fire or enthusiasm on the sideline.

What you will hear him talk about is his admiration and respect for the job that was done at Winchendon over the last two years, as that program developed a reputation for competing night in and night out despite facing a similar uphill battle.

The fact of the matter is that Bridgton’s climb will be an even steeper one in the coming season and if they’re to follow a similar path then Lesure must rally his troops and develop a resiliency that will surely be tested throughout the season.

Local New England products Chris Lee and Kamahl Walker are two players who will have to take on a leadership role.  Lee will have to answer the challenge inside the paint on a nightly basis while Walker’s game, and leadership ability, at the point guard position will both be tested to the max.

Dorrell Foster, a six-foot-six forward from North Farmington High School in Michigan, is arguably the most prominent newcomer.  After that the roster is made up of guys who all have their unique assets, and will all need to buy into associated roles.

Justin Nolan and Anthony Russell will both be counted on to battle in the paint while Evan Orzolek, Andrew Guerrero, and Matt Crosby will provide value with their basketball I.Q.’s and three-point shooting.  Keenan Williams, Josh Irving, and Swade Edwards are all quick and athletic enough to physically compete, but will need to provide stability in the backcourt and strong defense on the perimeter.

Put the pieces together and there is almost no denying that Bridgton Academy is going to be facing an uphill battle on virtually a nightly basis.  For one of prep school basketball’s most successful all time coaches, that’s an unprecedented challenge of having no external expectations, only the internal knowledge that the possibility of getting this group to come together and overachieve might well be his best coaching job yet.