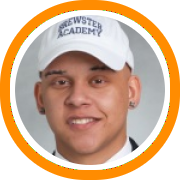 Settled in a seasonal beach town on the shores of Lake Winnipesaukee in New Hampshire is one of the nation’s pre-eminent prep school basketball powerhouses.

With National Prep Championships in 2010 and 2012, NEPSAC championships in 2008, 2010, and 2013, a cumulative winning percentage above .900 over the last six years, and five alumni having gone on the NBA, Brewster Academy head coach Jason Smith has built a program that has achieved success in every possible way.

A new season brings new challenges and if the 2013-2014 version of the team is going to write another chapter in the record books, they are going to do it with a different kind of roster than we’ve seen in years past.

While there is no less talent than we’ve become accustomed to seeing, this group is smaller and quicker than many of their predecessors.  There is no monster in the middle to follow in the footsteps of guys like Kyle Washington, Elijah Macon, Mitch McGary, Markus Kennedy, and Maurice Walker.

Instead, there are two of the best all-around athletes in the entire country in six-foot-nine Syracuse bound forward Chris McCullough and six-foot-eight Georgetown bound forward Isaac Copeland.  Six-foot-eight post-graduate Traylin Ferris is cut from a similar cloth in terms of his length and athleticism while Tabor Academy transfer Jarred Reuter may be the team’s only true low-post presence.

Jared Terrell and Kevin Zabo both return to the Academy for their second seasons after committing to Oklahoma State and San Diego State respectively this summer.  They’ll be joined by Devonte Graham, an athletic playmaking guard from North Carolina who has made national headlines in recent weeks because of Appalachian State’s refusal to release him from a National Letter of Intent he signed last November.

The other major addition to this year’s Brewster Academy roster is Canterbury transfer Donovan Mitchell, who has been making waves this fall during open gyms and will join Reuter in building a bridge to next season’s team.

While there is once again high-major caliber talent at virtually every spot on the floor, recent Albany commit Max Twyman could be as important as anyone on this year’s roster as his skill, basketball I.Q., and toughness will allow him to be a critical glue guy for Coach Smith.

Jordan Manse is another player who should be able to make steady contributions on the wing while Habi Abuzgaya is a similarly gifted athlete who could find his way onto the floor as well. Additional depth will be provided by post-graduate forward Jake Hilkey and sophomores forward Willie Swindells and Sam Kiley.

Put it all together and the long and athletic frontcourt is complimented by a deep and talented collection of guards, creating a roster that should be able to get out in the open floor and play at a pace that will delight the loyal fans of Wolfeboro, while once again looking to add another chapter to the record books of one of the nation’s best post-graduate basketball programs.