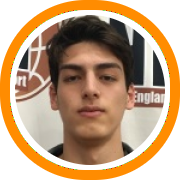 It was the first time since 2009 that Brewster Academy didn’t win a New England or National Championship.

This year’s team will be charged with taking back the hardware that so often ends up in Wolfeboro and while the challenge will be an ambitious one to say the least, they certainly have the firepower to be among the contenders.

As it so often does, it all starts in the backcourt. Some of Brewster’s best teams over the years have been led by three-guard line-ups and this year’s squad is no different as Makai Ashton-Langford, Thomas Allen and Michael Okauru provide the majority of the perimeter firepower.

Ashton-Langford comes over to Brewster after graduating last year from Cushing Academy. One of the top playmaking guards in the country, and an early UConn pledge, Ashton-Langford won four different championships this summer with the Mass Rivals and will now look to extend those winning ways to the prep school season.

Allen and Okauru join forces with Ashton-Langford after previously competing for the same title. Both North Carolina natives star with Gardner Road, another top program on the Adidas Gauntlet, and so they’ve gone head to head with Ashton-Langford on more than one occasion. Allen is a scoring guard with an especially dangerous jumper while Okauru, at 6-foot-4, is a big and versatile guard capable of playing and defending multiple positions. Both are also true seniors.

Semih Say returns for his second year at Brewster and provides yet another division I prospect in the backcourt. At 6-foot-4, he’s a big point guard who should provide a crafty playmaker off the bench. Colyn Waldron, a post-graduate who put up big numbers during his high school career in Michigan, solidifies the team’s backcourt depth.

While the Bobcats are again loaded on the perimeter, one of their defining characteristics this season will also be a surplus of multi-dimensional and athletic wings. Aaron Wheeler, who comes to Brewster after previously starring at St. Andrew’s, is the most notable name for local products. A smooth 6-foot-8 wing with untapped potential, he has been adding high-major suitors on a consistent basis since open gyms began three weeks ago with Purdue and North Carolina State being the latest to join the pursuit.

Another name familiar to local fans is that of Sidney Wilson, a New York native who previously starred with St. Raymond's who came into New England last year and shined at both the Hoophall Classic as well as with New Heights at the Northeast Hoops Festival. One of the most explosive athletes in the entire country, Wilson’s recruitment has now gone to the very highest levels since joining the class of 2018 with recent offers from Louisville and Texas among others.

The name that might not be as widely known yet, but could end up being as integral to the team’s success as almost anyone on the roster, is that of Curtis Haywood II. An ultra-versatile 6-foot-5 wing from Oklahoma, Haywood can play at least three different positions at this level. Combine that with the ability to make open shots from behind the arc and finish above the rim and he’s a maximum utility asset for the Bobcats.

Up front, Brewster will have a distinct international appeal. Lukas Kisunas was the starting center for Lithuania’s 17-and-under national team this year and scored a pair of high-major offers in his first twelve hours in the U.S. A rugged and tough big man with good interior skills, he’ll remind the local Wolfeboro fans of Jarred Reuter. He also joins Wilson in the class of 2018 and so he’ll help bridge the gap to next year’s team as well.

Former South Kent big man Aziz Sultan Essa remains in New England, although most people wouldn’t recognize him if they haven’t seen him in the last year or two. He’s lost well over 100 pounds in that time and his newfound conditioning and mobility is allowing him to showcase his combination of size and skill that makes him a legitimate candidate for a scholarship.

Sultan-Essa and Avi Schafer will provide the duo that backs-up Kisunas up front. Schafer is an athletic 6-foot-9 forward from Japan and an exceptional student who is capable of playing a couple of different positions and already being recruited by some of the country’s top academic colleges.

If this team has a liability it may be their youth. Relative to the rest of the league, and especially the likes of NMH and New Hampton, the Bobcats are both younger and less experienced. The talent, balance and depth is all there, but if they plan to return to the pinnacle of the prep school basketball world, they'll need to grow up and come together in a hurry because when the front of the jersey says Brewster there is always an X on the back of it.