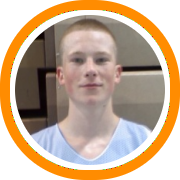 Burt won the award by virtue of being the top vote getter in the state.  Players were graded in three different areas – academic excellence (25 percent), sportsmanship (25 percent), and basketball accomplishments (50 percent).

Burt was the leading scorer for a Dover team that advanced to the semi-finals of the Class L state tournament and finished with an overall record of 16-5.

The senior guard was also named All-State First Team in Class L and received an automatic bid to this summer’s Twin State Rotary Games by virtue of being the leading vote getter.

Burt is the first player in the history of Dover High School to ever be named Mr. New Hampshire Basketball.