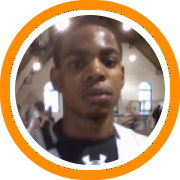 Player of the Week – Anthony Ireland, Crosby High School
The unsigned senior went for a career high 46 points last Friday night as Crosby scored 108 points and held Ansonia to 83.  Ireland connected on 5 three-pointers, made all five of his free-throws, and showed a variety of moves from both the mid-range area and converting around the rim.  Then five days later Ireland poured in another 37 points as Crosby scored a big win over Sacred Heart High school.

Player of the Week - Brett Bradford, Bangor Christian
He scored a whopping 53 points last Thursday night including 9 three-pointers and 16 made free-throws in a 78-76 win over Lee Academy.  Then a few days later he scored his 1000th point as he had 17 in a 56-49 win over Searsport.

Player of the Week – Laliel Langston, Dorchester High School
He scored 27 points including 8 three-pointers in a 74-71 win over New Mission earlier in the week and then followed up on that by handing out an amazing 23 assists on Wednesday night as Dorchester defeated Hyde Park 108-56.

Player of the Week – Jamie Zajac, Bishop Guertin
While he may not have played his best all around game, he was nearly perfect in the final 30 seconds of Bishop Guertin’s match-up over Alvirne.  First, he converted at the free-throw line to tie the score with 23 seconds left, then, following an Alvirne turn-over, he went the entire length of the floor with his dribble before pulling up from 16 feet and knocking down the game winner.

Player of the Week – Mike Juarez, Cranston East
The senior shooting-guard scored a game high 20 points on Monday night to lead his team to a 71-51 win over Central High School.  Juarez’ final bucket of the game made him the all time leading scorer in Cranston East High School history with 1359 career point.

Player of the Week – D.J. Campbell, Vermont Academy
The post-graduate led his team to a major upset last weekend as they Vermont Academy sent Cushing Academy home unhappy.  Campbell was the best player on the floor, scoring a game high 31 points on a series of three-pointers and pull-up jumpers from the elbow.