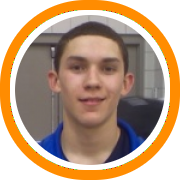 Player of the Week – Tevin Baskin, Trinity Catholic High School
Baskin had 33 points & 23 rebounds in a win over St. Joe’s on Friday.  Then on Wednesday, in a match-up of the FCIAC’s two unbeaten teams, he again dominated with 35 points and 12 rebounds as Trinity Catholic defeated Bridgeport Central 74-65.

Player of the Week – Joe OShea
O’Shea scored 23 points on 8-13 shooting from the floor, including 4-6 from behind the three-point line.  O’Shea also contributed 4 assists, 4 rebounds, and 4 steals.  Heading into Friday night’s division I final with Rice, Burlington is now 22-0 on the season.

Player of the Week – Spencer Braithwaite, Madison Park High School
The junior guard scored 39 points in the Boston City League Championship game to lead Madison Park to a 69-65 victory over O’Bryant.  Braithwaite was named the tournament’s Most Valuable Player.

Players of the Week – Jamal Coombs-McDaniel, Gerard Coleman, and Alex Oriakhi, Tilton School
Tilton has scored four consecutive big wins, likely clinching a spot in the National Prep Championship to be held at the end of the season.  In the last ten days Tilton has defeated New Hampton, Lawrence Academy on the road, Brewster Academy, and Proctor Academy.  Coombs-McDaniel had 20 points & 11 rebounds at Lawrence and 26 & 12 vs. Brewster.  Coleman had 16 vs. Lawrence, 19 points and 6 assists vs. Brewster, and 20 points & 4 rebounds vs. Proctor.  Oriakhi had 13 points & 13 rebounds at Lawrence, 19 points, 12 rebounds, and 3 blocks vs. Brewster, and 15 points, 12 rebounds, 4 blocks, and 3 assists vs. Proctor.

•  James Morse, Thornton Academy, scored a game high 17 points (including 9 of 10 from the FT line in the 4th quarter) in Western A Championship
•  Alex Bowe, Cape Elizabeth, 24 points in 58-48 win over Falmouth in Western B Championship
•  Andrew Dickey, Cape Elizabeth, caught a full length of the court pass and scored at the buzzer to win the Western B Championship
•  Duane Smith, Bridgton Academy, had 6 three-pointers and a game high 32 points in 85-79 victor at Brewster
•  James Philbrook, Edward Little, 18 points & 11 rebounds in class
•  Josh Sonia, Wiscasset, had 21 points and 5 three-pointers in loss to Dirigo

Player of the Week – Billy Baron, Bishop Hendricken High School
On senior night Baron went for a game high 36 points, including 23 after half-time, as Bishop Hendrick defeated Cranston East 77-74 to capture the Division I West regular season championship.  Baron also iced the game at the free-throw line knocking down a pair with 5 seconds left in overtime to push the lead to 3.  Earlier in the week, Baron scored 25 in 78-45 win over Smithfield.