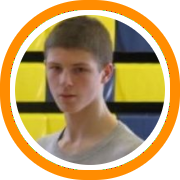 Michael DeMartinis - 6'0 G - 2017 - Burlington, MA - Mass Elite - Very impressive at the 75 going up against a parade of top 2016 back-court Dons throughout the afternoon.  Demart attacks with composure off the dribble-bounce, gauging the spacing on the floor before deciphering whether to confirm the basket attack or to call off the dogs and retreat to the war bunker to concoct another plan of attack for the offensive possession. Shot the ball well from the perimeter and on numerous occasions, he penetrated into the lane and then kicked out to a sniper for a three-ball.  Defensively, Mike showed the ability to cover all three perimeter positions and also displayed a willingness to mix it up physically with stronger guys.  Said it once and'll say it again; with his combination of size, athleticism, IQ, and skill set, DeMart has stud potential.

DeAndre Leslie - 6'4 F - 2017 - Brockton, MA - CBC - One of the most impressive bodies you will ever see on a 7th grade cat, D-Lez looks like a prime-time Simeon Rice out there competing on the floor, with big time athletic ability to go along with his man-child frame.  Runs the floor like a Kalahari Big Cat in pursuit of its' prey.  Still in the beginning stages of his offensive development but with his athleticism and physical package, Leslie has star-watch tattooed all over him.  In terms of physical development, if Leslie has any type of significant growth spurt still left in the potato sack, we could be talking King Leonidas from 300.  CBC 2017 Money Team...SMH.

Hans Gabriel - 6'3 F - 2016 - Rivers School - Shooting Stars - Long and lean locomotive combo forward who shares a do-it-all package from the front-court.  Excellent rebounder, especially from the small forward spot. Versatile defender who uses his length and agility to guard multiple  positions and also has the ability to challenge shots.  Attacking one-dribble-drive game from the wing and short corner.  Finishes around the basket with deft footwork and a soft touch.  Thoroughbred lane-runner who fills the fast-break streams like a school of salmon escaping a fishing Grizzly.  Looking for a closer look at his shooting stroke, range potential, and ball-handling ability.  Gabriel is like Jake Midura (profiled yesterday) in that he may have the potential to develop into a bird-stretch combo guard.

Jared Simmons - 5'7 G - 2017 - Newington, CT - CBC - Country-Crock smooth combo guard with a caramel shooting stroke and a cool-down, Slush Puppy pull up game.  Handles the rock effortlessly and ambidextrously, attacks off the dribble and looks to create or score the ball in the lane.  Still a young pup physically, Simmons is a 7th grade CBC operator who's among the most skilled back-court players in the Class of 2017.  Gonna be a fun ride watching J-Sim develop.

Wesley Jones - 5'10 G - 2016 - Boston - Shifty power guard who attacks north n' south off the dribble drive and looks to finish through contact with his powerful frame. Terrific in transition, where he'll take it hard to the rack and dare the opposition to step in and take a freight-train charge.  Wesley's quick feet enable him to guard both back-court spots.  Crashes down from the perimeter and rebounds the rock with an attitude.  Need a better good at his shooting stroke and the versatility of his ball-handling ability.  As he continues to grow and develops his game, Jones is an athlete with the potential to develop into a nice back-court prospect.

William Watkins - 6'1 G - 2016 - Long, athletic fighter-pilot who attacks to reggae-music off the bounce.  Instinctive floor-general who advances the ball up the floor with the dribble like the old-school Nintendo Paperboy weaving through route-hazards.  Dynamic play-making ability and handles the rock like a yo-yo magician.  Need a better look at his shooting stroke and his pull up/floater game in the lane; but as he develops physically, Watkins is yet another New England back-court player with a chance to race out in front of the pack in the New England Class of 2016 guard race.  Hometown + AAU ID??

Azar Swain - 5'5 G - 2017 - Brockton, MA - CBC - Coming into the event with the reputation as one of the top long-range snipers in the Class of 2017, A-Swazz did not disappoint at the 75, spacing the floor for his teammates and then consistently filling it up from three-point-land off the catch and shoot.  Swain is a master of stepping into his shot off the kick with his momentum going towards the basket and his shoulders already squared to the hoop.  Once he knocked down a few three-balls, defenders started closing out on him hard, at which point, Azar changed up, attacking the close out with the dribble drive off the shot fake, getting into the lane for a pull-up kiss or a kick out to another shooter for a high-percentage heave on the arc.  Still just a pup, Swain has a great basketball name and as he grows physically and becomes more dangerous on the dribble-drive attack, he should develop into a card carrying New England Class of 2017 back-court prospect.  Azar's running with the vaunted CBC 2017 Squad this spring.

Alex Frawley - 6'2 F - 2017 - Billerica, MA - Mass Elite - Stretched-out forward with deceptive length who makes plays all over the floor for his squad.  Does a tremendous job of using his pivot-foot in the paint to free himself up to uncoil and make a bid towards scoring the rock. Slippery windex-man who slips through box-outs like a wet dog in a bathtub to rebound the ball.  Good length and lab-tech instincts make A-Frawl a cat who can guard multiple positions.  Nice shooting touch from the mid-range, finishes with either hand at the cup.  As he grows, extends his shooting range,and develops his ball-handling ability, Frawley is a guy who could emerge as a front-court or back-court juggernaut in New England's Class of 2017.

Keith Brown - 6'1 G/F - 2016 - Maine - Maine Nation - - Elmer's Glue wing player who facilitates on offense and fills it up from behind the arc.  Spreads the floor, sets screens, hits the glass from the perimeter, and a mega-phone communicator out between the lines.  We'll see how many more inches he has in the safe-deposit box, but Brown for sure is one to watch.  KB will run with Maine Nation this spring.

Kyle Cassarino - 5'6 G - 2017 - Montpelier, VT - Savvy, high IQ combo guard with a change of pace flavor to his offensive game.  Shoots the basketball well and understands how to space the floor. Team ballplayer who looks to make the extra pass and who does a terrific job of feeding the post.  Smart team defender who is always on the wall.  Still just a pup, Cassarino, as he develops physically, has a chance to develop into a nice Green Mountain State backcourt prospect.