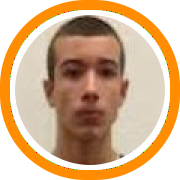 Tucker Impemba - 6'2 F - 2016 - Austin Prep (MA) - Mass Elite - Long, athletic combo forward with an enticing skill-set and a premium motor.  Relentless on the glass and gets his moneys worth in the lane.  Runs the floor like a Mack Truck to fill the lanes on the fast-break.  As his perimeter tool-box and foot-work mature, Impemba is a hardwood/gridiron prospect who will be pitching his tent right along the 2016 New England Prospect Path.

Trevon Avery - 6'4 PF - 2016 - New Haven, CT - CT Elite - Active wide-body forward with enticing length and a bruising flavor to his game.  Scores around the basket, eats space in the paint and protects the cup with his shot-blocking ability.  Big time rebounding potential with his combination of length, size, and physicality.  As he grows, fine tunes his post game, and develops the ability to finish with both hands, Trevon's a big-body forward prospect to watch in 2016.

Mike McCourt - 6'0 SG - 2016 - Lincoln, RI - RI Hawks - Versatile wing-player who takes it hard to the basket and finishes through contact.  Team ball-player who spreads the floor, sets solid screens, makes hard basket cuts off the ball, and looks to make the extra pass.  Defensively, McCourt is a physical perimeter defender who gets up into the body of wing scorers to make them uncomfortable.  Strong rebounder from the back-court position.  Likely to project as a 2-guard down the line, as he tightens his handle and extends his shooting range, M&M seems destined to hop on the prospect tour bus as time unwinds.

Austin McCrum - 6'1 F - 2016 - Saco, ME - One of the top combination front court players at the 75, McCrum is a long, athletic forward who finishes at the rim and also steps out and shoots the ball well from the outside with a smooth stroke.  Runs the lanes hard on the break and finishes through contact at the tin.  Versatile defender who hits the glass hard on both ends.  As he grows physically, improves his handle, develops his dribble drive game from the wing, and extends the range on his jumper, A-Mac has big upside as a 2016 forward prospect.

Jake Kakar - 5'11 SG - 2016 - Freetown, MA - Bay State Magic - Cerebral wing player who spaces the floor with a nice shooting stroke from the outside.  Communicates with his teammates on the floor and does a nice job of staying on the wall defensively.  As grows physically and tightens up his handle, JK has the potential to develop into a nice wing prospect in the 2016 Class.

Bobby Piccolo - 5'8 G - 2016 - Tewksbury, MA - Hard-nosed guard who brings toughness to the back-court.  Gets after you on the defensive end like a bee to honey.  Still in the beginning stages of his offensive development, with his tenacious mentality, B-Pic certainly has the potential to develop into a guard-dog backcourt prospect in New England's Class of 2016.

Jackson Dwyer - 6'0 F - 2017 - Montpelier, VT - Talented young front-court player from the Green Mountain State Capital who goes to work with a savvy set of post moves on the block.  As he gets stronger on the boards and more physical on the defensive end, JD has yellow-brick-road potential in New England's Class of 2017.

Sean Mosher - 6'1 G/F - New Bedford, MA - Talented, energetic team player with a nice shooting stroke and the ability to finish at the basket.  Sees the floor well, understands the effectiveness of quick individual possessions of the ball, and does a nice job of feeding his teammates for scoring opportunities.   In closing, Mosher is a nice, well-rounded wing player who should develop into a nice prospect as the Grandfather Clock ticks.

Tyler Wilson - 5'11 G - 2016 - Stalwart guard with quickness who competes all over the floor.  Defends, facilitates, attacks, and will finish at the tin.  No-nonsense attitude gives the impression that Wilson is serious about becoming a player.  As his perimeter skills develop and he concocts his own unique offensive flavor, TW is the type of  competitor with whom Yellow Brick Road coaches want to dine.

Mike Rivers - 5'8 G - 2016 - Arlington Catholic (MA) - Arts and Crafts high-IQ glue-man who plays his tail off and will assume whatever role necessary for his club to succeed out on the floor.  At the 75, while squadded up with the likes of Tyonne Malone, Brandon Hurst, Julius McKinistry, Chandler Jones and more, Rivers checked down into a complimentary role and used the talented weapons at his disposal as means of attacking the opposition.  With his Einsteinian-comprehension of the game and his selfless attitude, as he grows and his skills develop, Rivers looks like a nice 2016 prospect in the making.