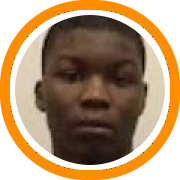 Kingsley Cockburn - 5'8 G - 2017 - East Hartford, CT - Among the top 7th grade guards at the 75, Kingsley is an explosive combo-guard with a tight handle who attacks off the bounce and finishes through contact at the bucket.   As his game diversifies and he develops a hard-nosed defensive attitude, Cockburn has a chance to be very good.

Jamison Dunn - 5'8 G - 2017 - Gardner, MA - Talented young guard who brings a versatile offensive package to the back-court.  Dunn has a nice shooting stroke, a well-developed mid-range pull-up game, and the ability to use the dribble drive to get to the basket and finish at the tin.  As his defensive mechanics improve and his offensive package matures, J-Dunn is one to watch in New England's Back-Court Class of 2017.

Sherron Dailey-Harris - 5'10 G - 2016 - Manifest Destiny guard who gets to the basket with a purpose and has the ability to finish at the tin.  Possesses a premium defensive tool-box and an aggressive, attacking mindset out between the lines.  As he tightens up his handle and develops a more comprehensive understanding of the game, SDH will have a ping pong ball in the mix when the 2016 Yellow Brick Road Lottery goes down.

James Fadule - 5'8 G - 2016 - Milton Academy - Strong, physical guard with the ability to get to the basket and finish. Efficient ball-handler who makes good decisions with the rock in his hands. Aggressive defender who gets up and challenges on the perimeter.  Plays all out and does a nice job of rebounding from the back-court.  Need a better look at his shooting stroke and range potential, but going forward, as he grows, tightens his back-court skill set, and develops a more aggressive offensive mind-set, J-Fad should catch an invite to the 2016 Yellow Brick Road Dance.

Jeky Robinson - 5'7 G - 2016 - Boston, MA -  Rubber band guard with length who brings twitchy quickness and athleticism to the back-court.  One of the premier on-ball defenders at the 75, Robinson combines his physical tools with a hawking defensive mentality to lock up opposing ball-handlers like a Depression-Era safe-deposit-box.  Offensively, Jeky is a capable ball-handler who facilitates and will attack with the dribble when the Seas part.  As he grows physically and develops his offensive back-court skill set, JR is a 2016 hornet-nest guard prospect to watch.

Jeremiah Osteen - 6'0 F - 2017 - Bristol, RI - Talented combo forward who goes to work in the post and also sneaks out to the perimeter and attacks from the wing.  Hits the glass hard on both ends and runs the floor all-out looking for opportunities to fill the lane on the break.  Need a closer look at his shooting stroke.  As he grows physically and develops his perimeter skill-set, Osteen has the potential to develop into a nice forward prospect in the Ocean State's Class of 2017.

Josh Condon - 6'2 F - 2016 - Sandwich, MA - Agressive front-court player who brings a lunch-pale, tool-box, and skill-set to the morning shift.  Attacks the basket with the one dribble drive from the mid-range and is also capable of knocking down the face-up jump-shot.  As he develops his perimeter game and extends his shooting-range, Condon is a 2016 Cape Cod forward prospect to watch.

Shamus McNeil - 5'10 G - 2016 - Norwood, MA - Drag-strip guard who brings size and quickness to the back-court.   Attacks at 100 mph, putting the defense perpetually on its' toes for a foreign invasion. As he grows, learns to be more efficient with his dribble-drive game, learns to change up his pace, and develops his back-court skill set, McNeil could develop into a nice 2016 prospect.

Calvin Whipple - 5'8 G - 2017 - Lunenburg, MA - Mass Elite - Savvy wing player with a lights-out shooting stroke and a symphonic understanding of the spacing and pace of the game.  Plays the game in perpetual motion, making it a pain in the neck to guard or be guarded by C-Whip.  As he grows and develops his ball-handling ability, there's lots of potential for Whipple going forward as 2017 perimeter prospect.

Sam Kilborn - 6'4 F - 2016 - Gorham, ME - Long loping big fella from the Pine Tree State who gets after it on the boards and has the tools to develop an effective post game on the blocks.  Also should turn into a strong post defender and has the skill set to possibly bring a mid-range face-up game to the Thanksgiving Table.  Not sure how many inches this cat has left on his growth chart, but if gets a few more and develops accordingly, Kilborn has the potential to emerge as a nice post-prospect in the Class of 2016.