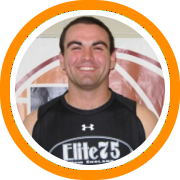 The NESCAC has a well deserved reputation for being one of the premier leagues in all of division III basketball, both academically as well as athletically.

In fact, the league currently holds three of the top ten ranked division III teams in the country while also boasting an incredible academic reputation.

Because of the unique blend of academics and athletics, each year the NESCAC lands a variety of scholarship level prospects, who often times spurn higher levels for the chance to compete in this proud league.

This week, the conference picked up three such prospects:

Middlebury College landed a commitment from Henry Pendergast earlier this week, following his early acceptance by the school’s admissions department.

Pendergast has been a main staple of a Kent team that has developed into a perennial contender in class A over the last three years and is coming off a very successful summer that saw him impress both with his Rhode Island Hawks AAU team as well as at a variety of academic elite camps.

“I chose Middlebury because of its unparalleled combination of academic and athletic excellence and because it is a program where I can go and win for four years,” Pendergast said. “I felt really comfortable with head coach Jeff Brown and assistant coach Alex Popp, and they did a great job recruiting me.”

Pendergast also said the opportunity to go in and play the point guard position, as opposed to the shooting guard spot, was also appealing about a potential career at Middlebury.

Pendergast called his recruitment an unexpectedly long process and expressed his gratitude to his coaches, both current and future, for helping him along the way.

“I would like to thank my head coach Jason Coulombe for extensively helping me in this process for the past three years, and both Coach Brown and Coach Popp at Middlebury for taking me in.”

Pollack has had a long and distinguished career at Farmington, being named to the Central Connecticut Conference’s all-conference teams as both a sophomore and a junior, and earning all-academic conference honors in each of his three seasons.

“[Amherst] Coach Hixon and I have a good connection and I think I can get time as a freshman,” Pollard said.  “It’s one of the best colleges in the country and that was a big part of the decision for me.”

Pollard averaged 17 points, 14 rebounds, and 3 blocks per game last season as a junior and followed that up with an impressive summer, generating scholarship level interest while running with Connecticut Select and attending several prestigious camps and showcases.

The skilled big man is an accomplished scorer with his back to the basket and also an especially good passer in the frontcourt.

Palleschi, the six-foot-nine center from Phillips Andover Academy, could prove to be the star of the class as his combination of size, agility, and basketball I.Q. should be tough to match in the NESCAC.

“Tufts was clearly the place for me,” Palleschi said.  “I felt very comfortable on the campus, it is close to home, the coaching staff is great, and there’s an opportunity for me to play both basketball and baseball from two strong programs.”

Palleschi earned second team All-New England honors in class A last year after leading Andover on a run to the semifinals of the class A tournament.  He has had equal success on the AAU circuit over the years running with the New England Storm.

“Most importantly, Tufts is an amazing academic institution,” he said, “and I am looking forward to taking advantage of everything it has to offer."

All four incoming freshman should have an opportunity to see immediate playing time next year as Tufts graduates all three front court players and two more after the following season.