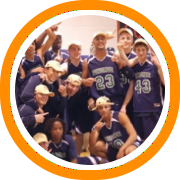 The NEPSAC’s smallest league has two big talents as Boston Trinity and Christian Heritage are the frontrunners in Class D.  The two favorites have an early season match-up on the horizon as they will face off at a neutral site when they meet at St. Andrew’s holiday tournament on December 18th.

Head coach Rick Linet’s team may have the most talent and depth in the league but experience isn’t necessarily in their favor with only two seniors in the main rotation.  Six-foot-seven swingman Velo Lukic and six-foot-eight big man Kadeem Wint return as the leaders of the squad.  Lukic is a versatile talent with the body of a forward and playmaking skills of a guard while Wint provides a powerful interior presence with the physical tools to be dominant.  Wint will have plenty of help down low as six-foot-seven Charlestown transfer Elijah Okagbare and six-foot-five Tevin Montgomery are newly arrived.  Okagbare gives BTA great athleticism inside the paint while Montgomery is a powerful freshman who will be able to bang with anyone on the blocks.  Newly arrived sophomore Rodell Wigginton is the team’s best pure talent and the Canadian native has all the tools to develop into a big time prospect.  Lutheurson Bonheur, Kayon Mayers, and Kadeem Thompson provide a steady three guard rotation in the backcourt.  Bonheur is a dangerous dribble driver, Mayers an explosive athlete, and Thompson a strong and scrappy guard.

Jason Perrier and Braxton Gardner give head coach Rick Viera a lethal one-two punch as the senior duo have all the tools to lead Christian Heritage to big things this season.  Perrier is a strong and physical guard who has made great strides since last season.  He is shooting the ball more consistently, being more assertive attacking the rim, and learning how to best utilize all of his physical tools.  At six-five Gardner is a big bodied forward with quick feet and a soft touch.  The lefty is equally effective scoring around the rim or draining jumpers from the perimeter and will prove a tough match-up for any opposing defense.  Sophomore Bryan Jones could quickly turn the dynamic duo into a terrific trio as the sophomore is also much improved and already putting big numbers on the board.  The Kingsmen also have the necessary depth to be successful as Kevin Clark is a returning double figure scorer, Aaron Bartley an athletic sophomore guard, and Tyler Gruttadoria a skilled and tough guard.

•  Green Farms Academy (CT) will be a team to be reckoned with as Dan Chase and Luarent Firlotte leading the way.

•  Pingree (MA) lost almost everything from last year’s championship club but Cody Addison returns to the mix to play a staring role.

•  With Tom Sienkiewicz at the helm and son Nick Sienkiewicz returning for his senior year, Providence Country Day (RI) will be disciplined and dangerous.

•  Jabrille Williams gives King (CT) a star to build around who is equally capable of dunking on defenders or draining smooth threes.

•  Hamden Hall (CT) will be much improved with good balance from Jordan Kubilus, Dante Brito, Kashon Brown, and Greg Brown.