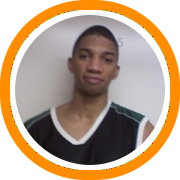 Winchendon and Mack Academy produced the day’s most exciting contest of the day on Saturday as the game went all the way down the stretch to the delight of the on-looking crowd.  After going back and forth for most of the second half, Mack opened a slim 77-76 lead with 1:28 to play.  Anthony Ireland had a lay-up attempt blocked on the ensuing possession but Khem Birch flew into the offensive glass for a tip in plus the foul giving Winchendon a 79-77 lead.  Akeem Williams made the defensive play of the game on the next possession.  With his man looking to attack off the dribble, Williams beat him to the spot and drew the charge.  After Winchendon failed to ice the game at the free-throw line, Mack had one last possession.  Calvin Newell, who had already gone for 37 points, launched a step back jumper from 20 feet that fell off the back of the iron, but Isiah Stokely grabbed the offensive rebound and was fouled on his way back up.  Stokely went to the line with his team down two and only one second remaining.  After missing the front end of two shots, Stokely intentionally missed the second hoping to send the game into overtime on a tip-in.  But Birch would knock the ball away again and finalize the two point win.

Lee’s backcourt was the difference in this one as David Hanson had 20 points and Lenzie Harrison 11.  Vaughn Allen controlled the paint with 16 points and 11 rebounds.

A classic match-up between two of the countries’ most respected coaches in St. Thomas More’s Jere Quinn and Fork Union’s Fletcher Arritt, this game was highlighted by 40 minutes of good execution on both ends.  Bryon Allen and Dominique Langston scored 16 a piece for St. Thomas More while Trahson Burrell had 15.

Bridgton played Hargrave tough in the first half before the nation’s number one ranked team ended up pulling away in the second.  Seton Hall bound guard Dashaun Wiggins had 14 points for Bridgton while five players scored in double figures for Hargrave.

After a hard fought first half, Notre Dame gradually pulled away in the second for a well earned victory.  Ron Giplaye was a beat inside, scoring 16 points on 7 of 11 shooting from the floor while grabbing 12 rebounds, including 8 offensive.

If there is such a thing as a moral victory, then Worcester Academy earned one Saturday night.  Playing without Tyler Olander, Robert Gilchrist, and Russell Deremer, WA went blow for blow with the nation’s second ranked team.  Billy Baron led Worcester with 22 points, 9 rebounds, and 4 assists while Melvin Ejim led five players in double figures for Brewster with 17.

MCI overwhelmed Kiski with their size and experience.  Steven Roundtree was a monster inside using his mobility and athleticism to get to the rim and finish.  Georgios Papapetrou chipped in with 15.

Dunk of the Day

St. Thomas More’s Dominique Langston enjoyed playing in front of the hometown crowd and produced two solid outings.  The punctuation mark came in the second half of this morning’s game when he streaked at the rim in transition.  As Langston elevated to finish, an oncoming defender went to give the foul to present the easy lay-up.  But Langston used his power to elevate through the contact, dunk over the defender, and earn the old fashioned three-point play in the process.

Faces in the Crowd