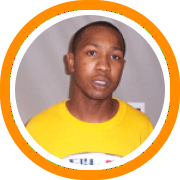 There was a stretch in the first half of Notre Dame Prep’s game against Stoneridge on Saturday where Michael Beasley scored on every offensive possession and either secured a defensive rebound or blocked a shot on every defensive possession for about 2 minutes of action. To say that Beasley’s first half show was the most impressive individual performance we have seen so far this season would be an understatement. The Kansas State bound forward first established himself on the interior where he was able to score with some fade-away jumpers with his back to the basket or crash the offensive glass for put backs. With his low post game flowing the rest of the game opened up for Beasley as he hit threes, attacked the rim off the dribble, brought the ball up the floor, and created shots for his teammates. Despite seeing only limited action in the second half with the game’s outcome in little jeopardy, Beasley scored 30 points on 14 of 21 shooting from the floor (including 2 of 4 from behind the three-point line), while pulling down 15 rebounds (6 offensive), blocking 2 shots, and committing 0 turnovers in 24 minutes of action while matched up against Troy Gillenwater. A day earlier Beasley was equally impressive as he was the catalyst for a huge win for his #2 ranked Notre Dame Prep against the #4 ranked Boys to Men Academy and Nyal “Mac” Ksohawal. Beasley scored 23 points on 11 of 18 shooting from the floor, pulled down 14 rebounds, and blocked 3 shots in 28 minutes of play. Here is a look at some other players who were impressive through Saturday’s action.

Beasley’s Notre Dame teammate Deonte Roberts was very efficient in both games. Although his numbers won’t jump out at you he continued to be able to attack the rim at will and even showed improved range on his jump shot to the three-point line. And if that shot becomes a consistent part of his arsenal then he will be almost unguardable, because we’re talking about a player who is already phenomenal off the bounce, extremely athletic, and a good passer in the lane.

Devin Ebanks had two good games for St. Thomas More. His most impressive actually came in a 65-63 loss to Laurinburg on Friday when he scored 27 points on 13-17 shooting from the floor. His strong play continued on Saturday as he scored 21 points on 9 of 14 shooting, including 2 of 4 from beyond the arc, and pulled down 6 rebounds in STM’s 74-55 win.

Chris Turner and Malcolm Grant led a Winchendon team against the #3 ranked team in the country, Patterson School, on Friday night. Despite outstanding performances from the backcourt duo Winchendon was unable to overcome a balanced Patterson attack and ultimately fell 86-80. Nevertheless, Turner was outstanding, especially from behind the three-point line where he converted 7 of his 13 attempts from down town en route to scoring 27 points in addition to snatching 4 rebounds and 3 steals. Point guard Malcolm Grant, who has been a rock for Winchendon Head Coach Mike Byrnes all year long, also shot the ball well making 4 of 6 from three-point land, scoring 21 points, dishing out 4 assists, and grabbing 3 rebounds.

In perhaps the most anticipated game of the day Saturday, Patterson School, fresh off their hard fought victory against Winchendon a day earlier, squared off against the top ranked team in the country, Bridgton Academy. For the second time in as many days Bridgton was led by long range specialist Greg Hill who scored 20 points on 7 of 8 shooting from the floor and 4 of 5 shooting from behind the arc, to lead his squad to a 97-84 victory. A day earlier Hill scored 26 points will going 5-9 from behind the three-point line in a victory against Stoneridge.

Stoneridge had the unenviable task of playing the top two teams in the country this weekend in Bridgton Academy and Notre Dame Prep. After Beasley went off in the first half of their Notre Dame game, the second half belonged to Massachusetts native Troy Gillenwater. The 6’7 Gillenwater was able to compensate for his lack of size against Beasley by facing up and taking the ball right into his chest preventing him for being able to elevate. In his first basketball related trip back to New England since the National Prep Showcase in November, Gillenwater demonstrated the footwork and low post game that makes him one of the top 100 players in the country.

Brewster Academy squared off against Genesis One on Saturday night without two of their starters in Craig Brackins and Terrell McKenzie. But a lot of credit has to be given to 6’7 junior power forward Emmanuel Negedu and 6’5 post-graduate swingman Tristan Thompson who both stepped up to carry the team. Negedu was unstoppable when he caught the ball close to the basket converting on 10 of his 12 field goal attempts including several thunderous dunks to finish with 22 points. Thompson converted three attempts from long distance and also showed a nice mid-range game to give Brewster a big boost off the bench with 20 points and 5 rebounds.

Here are some other players who caught our eye this weekend: UMass bound power forward Travon Wilcher from Lee Academy has added a significant amount of muscle to his upper body as well as a consistent 12 foot jumper to his arsenal. Wilcher’s teammates 6’5 Chris Baez and 6’2 Corey Bingham both had solid weekends and are two of the best swingmen left available in New England. Lee’s junior point guard Nate Tomlinson was great on Thursday with 18 points and 4 assists but played only 4 minutes on Friday. Also impressive in the Lee backcourt was Sessoo Ikpah who should make some low major program very lucky. Tremayne Russell a 6’1 post-graduate point guard from Florida is a new addition to MCI who made a three-pointer at the buzzer to win their game against Genesis One on Friday 68-67. Evann Baker was solid through both games for MCI while Kodi Augustas was inconsistent scoring 19 on Thursday and only 4 on Friday. Massachusetts native Alvin Abreu enjoyed his return to New England as a member of Boys to Men Academy. Abreu boasted a terrific physique and scored in double figures in two of his team’s three games. Anthony Gill continues to be a spark plug off the bench for Notre Dame Prep and could likely do the same thing at the low major level. 6’5 swingman Steven Brown from St. Thomas More shot the ball well from the perimeter knocking down 3 attempts from behind the arc in both of the Chancellors games. Drew Zito played well on Saturday showing off a good perimeter stroke and a high basketball I.Q. Austin Carroll, a 6’3 sophomore guard for Worcester Academy also shot the ball well from the perimeter going 3 of 4 from behind the arc in his team’s 60-49 victory on Friday. Mike Ringgold continued to be a warrior for Winchendon and had 15 against Patterson. Bridgton Academy was especially impressive with a very balanced offensive attack that had Brian Rudolph, Paris Horne, Justin Burrell, Greg Hill, Aaron Ellis, and Rashard Green all scoring in double figures in both of Bridgton’s victories. South Kent’s Jin Soo Kim didn’t put up any big offensive numbers but looked much improved on the defensive end especially in terms of his lateral quickness. P’Allen Stinnett had 15 points, 8 assists, only 1 turnover, and several highlight dunks that ignited the crowd in Brewster’s win on Saturday night. Despite playing in the final game of the day on Saturday, Proctor’s Anthony Fortes made the most of his opportunity showing his ability to create off the dribble and finish inside the lane against contact.