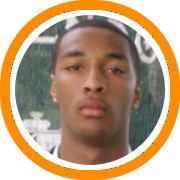 Chris Chaney’s squad earned all five first place votes after knocking off Hargrave 79-76 in an early December match-up.  Patterson has fire power at all five positions with the likes of Rashanti Harris, Clarence Trent, and Arsalan Kazemi on their frontline and DeAndre Kane and Hunter McClintock in the backcourt.

Previously unbeaten and top ranked Hargrave Military Academy slips to the second spot.  Despite their loss to Patterson they already have a handful of quality wins against Winchendon, Bridgton, New Hampton, and Fork Union.  And you can bet Kevin Keatts n’company are hoping for a rematch with Patterson in the national championship game.

Notre Dame is one of the hottest teams in the country right now having won seven straight and not lost a game since November.  Johnnie Lacy and James Southerland have led the charge for Ryan Hurd’s club as they’ve recently knocked off Brewster (twice), South Kent, St. Thomas More, Lee Academy, Massanutten, South Kent, and IMG.

Despite falling to Hargrave on a buzzer beater, Whit Lesure’s club used the National Prep Showcase as a way to make a statement to the rest of the country…they’re back and once again one of the nation’s best.  Their only other loss came in a trip to Fork Union but they have impressive wins over Winchendon, New Hampton, and Lee Academy.

Their only loss of the season came to St. Mark’s without head coach John Carroll as he was sidelined with pheumonia.  They earned retribution by claiming victory in the rematch last week behind another big performance from Mike Marra.  Other quality wins include a 30 point pounding of Fork Union and road wins at Blair and St. Thomas More.

First year head coach Kelvin Jefferson is making his presence felt in a hurry as his team is competing hard on both ends.  South Kent already has wins over Apex, MCI, Stoneridge, and St. Thomas More and their only losses came to top ranked Patterson and #3 Notre Dame by three.

Class B’s premier team hammered MCI, got a second class A win over Exeter, and then knocked off Marianapolis with Oriakhi out of action.  Match-ups with Winchendon, Brewster, South Kent, St. Thomas More and New Hampton loom in the new year, but Oriakhi, Jamal Coombs, and Gerard Coleman might just be up to the task.

Losses to Lee Academy on opening night and most recently to Marianapolis Prep have been small set backs, but Mike Byrnes’ teams always peek at the right time and you can bet he’ll have a group featuring Jordan Henriquez, Sampson Carter, Eric Ferguson, and Yves Jules ready to be contenders come the first weekend in March.

Fletcher Arritt’s squad has been the story of the season thus far as they’ve scored victories over Brewster and Bridgton.  You gotta love watching this team of over-achievers as they fight with everything they have and put out a production that exceeds the sum of their parts.

The nation’s 2nd ranked pre-season team is off to a slow start by their standards, but they’ve got too much talent and pride to let anyone take their NEPSAC crowns without a fight.  With the likes of Thomas Robinson, Andrew Fitzgerald, Givon Crump, and Naadir Tharpe on board, Jason Smith will have them running on all cylinders come March.