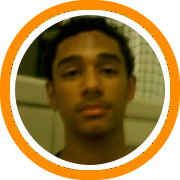 When Mike Myers-Keitt arrived at Marianapolis Prep this fall, he was already being followed closely by several in-state division I schools.  While some of those schools have received commitments from other players, Quinnipiac has been active with the Fairfield Prep alum all season long.  But now, Myers-Keitt has taken his play to another level, attracting the attention of a new group of college coaches.

“He’s playing really well,” said Marianapolis Head Coach Dave Vitale.  “Every part of his game has improved since the beginning of the season.”

And when Vitale says every part, he means it.  In fact, Myers-Keitt is the rare case of an athlete who has become much more athletic late in his career.  Sometimes he doesn’t even look like the same player who played primarily under the rim at Fairfield Prep, as this year he has been at his best in the open floor with his ability to finish explosively.

In addition to his much improved bounce, his skill set has also come a long way.

“He’s handling the ball more and his perimeter shot continues to improve.  He’s shooting it with much more confidence now and in better rhythm,” said Vitale.

When you put all of the pieces of the puzzle together you have a player with terrific size for the perimeter (6’7”), outstanding length and athleticism, and a blossoming skill set.

There aren’t many players in class B who can match those types of gifts, and that is a big reason why Marianapolis is off to a terrific start to the season.  Currently their record stands at 15-3 including a win against class “A” powerhouse Winchendon.

So as the season rolls on, and Myers-Keitt continues to impress, his list of potential suitors at the next level grows proportionately.  Now programs like Niagara, Siena, St. Francis, and Wagner have all joined Quinnipiac in the hunt for this talented swingman.

In Other News from Marianapolis:

•  Aaron Strothers is attracting a good deal of interest from several programs in the NE-10.  He is another player who has improved significantly since arriving at Marianapolis as he has added a consistent 15 foot jumper and a good deal more muscle mass.

•  Tom Henneberry, one of two sharp-shooting guards on the roster is getting a lot of looks from division II schools in the southeast corner of the country, and according to Vitale he isn’t opposed to going that far from home.

•  The other shooter, Nikoal Vukadinovic, is still getting recruiting interest all over the board.  This week Fresno State called to check on his progress, while most of his attention has come from the division II level.

•  Junior point guard Corey Wright Jr. continues to have a big year and is now hearing from a wide variety of division I programs.