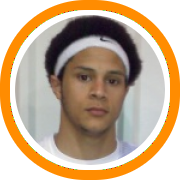 WESTON, Mass. - The Rivers School was home to the Massachusetts 16-under AAU Tournament this weekend.  For the first time, the format featured two levels, Division I and Division II, with 15 teams in the former and 12 in the latter.  The higher level of competition was in Division I, although neither was loaded with talent.  A number of the best travel teams in the state are not playing the AAU circuit, so a lot of the best talent was not here.  And although the champs in Division I got a major scare in the quarterfinals, by and large they were more than head and shoulders above the competition.

In the Division II championship game, New England Storm used an early second-half run to turn a 25-23 halftime edge into an early 35-25 lead over Bay State Magic.  After holding off the Magic, they would later build the lead to 49-37 late en route to a 56-43 win.  Yadoris Arias (So., Lawrence (MA) High) had a game-high 19 points to lead New England Storm.

In Division I, BABC survived a close call in the quarterfinals against Fidelity House, as they fell behind 10-0 early and trailed by five at halftime before pulling out the win.  When they reached the final against Team Magic, it was another story, as they ran out to a 19-2 lead and were up 43-14 at halftime en route to an 84-38 romp.  Egi Gjikondi (6′8″ Fr. PF, Malden (MA) High) led BABC with 22 points, Jeff Amazon (6′3″ So. SG, Charlestown (MA) High) added 14 and James Kennedy (6′5″ So. SF-PF, Dorchester (MA) Cushing Academy) added 12.