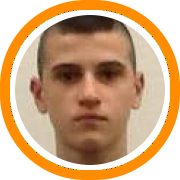 Mass Elite held their first annual Middle School All-Star Game this past Friday night in front of a bustling-crowd at the Masco Fieldhouse in Topsfield, MA.  Here's a look at the Mass Elite ballplayers who impressed on the night.

Alex Frawley '17- After playing more of a combo-forward role when we first saw him in February, on Friday night, Frawley showed as a long, attacking guard who uses the bounce to get to the rack from the perimeter and finish.  Frawley also filled it up from long-range with his pure shooting stroke.

Calvin Whipple '17 - Lengthy swing-man with a real knack for being in the right place at the right time to score the ball from inside and out.  Efficient playmaker with the ball in his hands.  Hustle rebounder who earns his share of boards on both ends.

DJ Frechette '17 - Sharp-shooting guard lit it up from beyond-the-arc.  Moves well without the ball to get himself good looks at the hoop from long-range.

Reilly Anderson '16 - Skilled wide-body big-man with a soft-touch and a nice arsenal of post moves on the block.  Handles the ball well and does a nice job of distributing the basketball to teammates for scoring opportunities.

Michael DeMartinis '17 - On Friday night, DeMartinis stepped into the back-court and facilitated for his teammates.  Handles the rock with finger-step control and throws precise passes to streaking teammates in transition.

Noah Gray '17 - Tenacious forward continues to develop his perimeter skill-set; scored the ball throughout attacking the basket from the mid-range while also showcasing a ripening shooting stroke and hitting the boards hard on both ends.

Ryan Veguilla '17 - High-IQ south-paw combo-guard who sees the whole court and looks to advance the ball up the court with the pass.  Knock-down 3-point shooter who spaces the floor.

Tucker Impemba '16 - Athletic big-man voluminously rebounded the rock in the paint and served as the anchor for his squad on the defensive end; challenging shots and calling out defensive rotations.

Matt D'Amato '17 - Triple-threat guard with a versatile back-court game.  Uses the bounce to get where he wants and scores the ball from the inside and out.  Nice shooting stroke and fills it up with range.