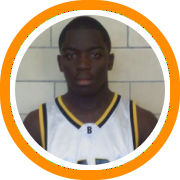 The Massachusetts AAU 15u Final Four took place on Sunday up at UMass-Lowell and the BABC freshmen took down the state title after topping the New England Storm in the semifinals and then running away from a hot-shooting Mass Premier squad in the final. The championship was the second in as many days for BABC after their sophomores captured a title on Saturday.  Here's a look at who impressed on Sunday:

Marcel Pettway - An absolute monster in the paint all day long, Pettway scored the ball at will around the bucket, swallowed rebounds whole, and used his deceptive length to protect the basket by challenging shots by the opposition in the lane.

Terrence Mann - Smooth swingman scored the ball every which way but while playing a loose, but tight, and unselfish brand of basketball.  High-IQ pure-scorer who continues to lengthen out and get stronger.

Brendan Hill - The heart and soul of his squad, Hill is the super-glue which binds together this BABC team.  While playing the point forward position yesterday, Hill chalked up the scorebook with points, rebounds, assists, steals, and Tommy Points.  Hill also showcased his ability to grab a defensive board in traffic before busting out with the dribble and leading the break.

Bruce Brown - Repeatedly got himself to the rack both in transition and the half-court set, finishing consistently at, or above, the rim throughout the afternoon.  With his aggressive attacking style combined with his length and explosive athleticism, Brown is developing into an enticing wing prospect.

Jordan Scurry - Scored the ball efficiently and consistently by attacking the rack from the wing and going to work with his mid-range pull-up game.

Kareem Davis & Earl Stephen - BABC - The point guard tag-team of Davis and Stephen ran the show efficiently for the Black and Gold, taking good care of the rock and consistently advancing the ball up the floor with the pass to create transition scoring opportunities for teammates.

Notes: The perimeter combination of Tyree Weston and Tommy Mobley packed a powerful 1-2 scoring punch for the Bay State Magic.  Weston has really taken his dual-triple-threat game to a new level in recent months and is a prospect on the rise as he continues to develop into a true back-court player after playing much of his schoolboy career as a big man.  Meanwhile, Mobley is a deadly trigger man with good size out on the perimeter who looks to draw hard close-outs that he can attack with the one-dribble drive before using his body to finish through contact at the bucket....Impressing for the New England Storm was left-handed slashing guard Gregory Trinidad, a Lawrence, Mass native who can really turn on the jets with the basketball in his hands.