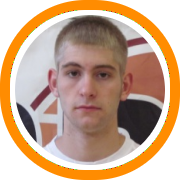 The inaugural East-West Showcase, hosted by MB Nation, featured the very best players that state of Maine has to offer.  A full day of action featured all-star games in 2011, 2012, 2013, 2014, and 2015 along with a girl’s game and a three-point and dunk competition.

Game Recap: 73-43 Blowout for the West. This group of players really impressed with their IQ for the game for their age. The floor was well spread and right off the bat they read the defense overplaying going backdoor and converting for lay ups. The fundamentals for their age really showed promise for basketball’s future in Maine.

Xavier Lewis (Bangor)- Showed a killer instinct attitude attacking the rim and finishing. He locked down defensively in the second half, taking pride in slowing down Dustin Cole using his length to bother the guard

Zach Gilpin (Hampden)- A six-foot-four big man who plays very hard and is extremely active around the rim.

Andrew Cartwright- (PCHS) A young big man with a European style game because of his ability to step to the perimeter at his size, Cartwright is a good spot up shooter with three-point range.

Dustin Cole (Bonny Eagle)- Came out playing 94 feet with tons of energy. Never gave up on plays and had an attacker’s mentality making the game come easy to him.

Jayvon Young (Portland)- Earlier on in the game he was the best player. He made everything look easy, taking advantage of what was given to him, and finishing.

Michael McDevitt (Greely)- A six-foot-five forward who plays his size, McDevitt moves well for a young big man and has good length, changes shots defensively, plays aggressive around the rim, and has a good mid-range game.

Game Recap: An 81-53 win for the East in a more up and down contest then the 2014 game as the extra year was clear in terms of the athleticism of the participating players.

Garet Beal (Jonesport-Beals)- One of the best overall prospects at the event, Beal is a solid six-foot-four swingman.  He was more aggressive in the 2nd Half showing his capabilities of being the best player on the court for his age.

Mitch Worchester (Washburn)- A guard with great control who excels in a fast pace spacing the floor.  He opened up on a tear as he was the best player on both ends of the floor.

Tyler Norris (Hampden)- He came out scorching the nets in the 2nd half hitting two 3-point shots and a layup plus the foul within the first 3 minutes and went on to hit two more 3-point shots that half.

Colton Bivinghouse (Katahdin) – A six-foot-five big man who gets up and down the court well for his size, Bivinghouse has a good motor and a terrific understanding of how to seal in the post.

Thiwat Thiwat (Deering)- A tough defender who showed it by taking on Beal at times.  He got off to a slower start offensively but gradually got going by working well in the post area.

Labson Abwoch (Deering)- He has a bit of a raw offensive game but is long, can score with mid-range jumpers or in the post, and has definite upside with some polish to his game.

Game Recap: This was the closest game of the day in a 100-92 win for the West. Coaching played an important part in the strategy of playing the clock and the players executed.

Cam Shorey (Phillips Exeter)- Reclassified forward with a built body and a touch from the mid-range area to behind the arc, Shorey also showed some bounce and ability to get above the rim and finish with flair.

Chris Braley (Nokomis)- The shooter showed some new elements to his game playing the point at times, utilizing a quick crossover, and playing a high-energy game.  He also saw the floor well and demonstrated a great dribble pull-up game.

Pat Stewart (Bangor)- A high motor big man who uses his six-foot-five frame and high motor and crash the boards hard on both ends of the floor.

Christian McCue (Hampden)- Heady and fundamentally sound guard who read well coming off ball screens and knocking down dribble pull-ups off of them.

Jon Amabile (Deering)- The leading scorer in Maine for the 2009-10 season, Amabile finds a way to score big buckets, is especially adept at getting himself to the free-throw line, and can also get his teammates involved since he draws so much attention from opposing defenses.

Harry Rafferty (Berwick Academy)- The lefty is a spot up shooter who an opponent can’t leave open. In the open court he pushes the tempo and dishes it well in transition.

Liam Langaas (York)- A guard who showed an aggressive but well balanced overall game. Does a little bit of everything and could be a great glue guy at the next level.

Dennis Ross (Prep)- A long and athletic six-foot-two swingman who really runs the floor well and wants a quick up and down game.

The East took an 86-73 win behind 17 points from Tyler McFarland.  Alex Furness scored a game high 21 in a losing effort for the west.

Tyler McFarland (Camden)- Six-foot-five forward who has a great motor and ability to follow his own misses inside the paint.  He showed three-point range and ran rim-to-rim well for a big while also bullying people around the bucket in the second half.

Keegan Pieri (Camden)- A skilled swingman with good size who did his best work in the mid-range area with a smooth dribble pull-up game.

Tristan Thomas (Bangor)- A shooter who struggled most of the game to get going but made up by getting his teammates involved and playing with a takes attitude.

Graham Safford (Hampden)- He shot the ball extremely well from long range, mixing it up by spotting up and coming off ball screens, and also made some great passes, hitting every open teammate for easy lay-ins.

Joe McCloskey (PCHS)- A six-foot-five big who played well opposite of McFarland. Went either shoulder in the post and used his body very well to get an easier shot.

Bo Leary (E.L)- He stuck out by his play early in the second half, using his energy and aggressiveness to get to the rim to finish plays.

Andrew Shaw (Thornton Academy)- Future Bentley forward played with a high motor, was all over the floor, and crashing the boards constantly.  Shaw also showed a good post game, scoring over either shoulder down low.

James Ek (Thornton Academy)- Typically a three-point specialist, Ek was at his best when taking it left for his mid-range pull-up.  He played with a lot of confidence in the second half, knocking down shots from mid-range and behind the arc.

Alex Furness (Wells)- A long lefty point guard who has a quick release and a consistent 3-point shot. Furness took it to the rim, finished, and played with a lot of energy in the 2nd half.

Jackson Frey (Deering)- A five-eleven guard who flew around the court and guarded well letting his man know they weren’t getting by.