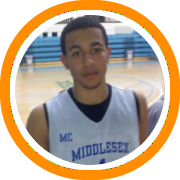 The night’s activities began with a series of skills and drills to showcase each player’s individual abilities before moving on to a competitive scrimmage between the two successful programs.

Aaron Davis, Brooks School – While players are typically out for themselves in showcase style atmospheres, Davis proved to be the exception to the rule as he stood out with his floor vision and passing ability not to mention some intimidating stances defending the basketball.

Adam Bramanti, Masconomet Regional High School – Arguably the most skilled player at the event, Bramanti not only showed his smooth jumper but also led the break with vision and found ways to score quickly when getting his chances inside the lane.

Connor Mahoney, Brooks School – While obviously not yet back to 100% following his knee injury, Mahoney stood out quickly with the touch and range on his jumper.  As the night went on he showed good dexterity around the rim and a capable back to the basket game.

John Henault, St. Bernard’s Central Catholic High School – The potential post-graduate showed the same cut up frame and deep jumpers that we have come to expect while also looking to be more aggressive with his dribble in the open floor.

Anthony Barry, Brooks School – A high level athlete with a powerful body, Barry utilized his physical gifts to attack the rim and lock up defensively while also showing a now consistent pull-up game in the mid-range area.

Zach Karalis, North Andover High School – He’s consistently one of the Storm’s best scorers but tonight he was content to let others take the glory while still putting the ball in the basket with ease when the opportunity presented itself.

Cooper Ainge, Wellesley High School – He just plays hard.  As tough and scrappy a player as there was at the event, Ainge sprints the floor, defends the ball, feeds the post, and makes open shots with a compact three-point stroke.

Colby Smith, North Andover High School – A coach’s son at every twist and turn of the game, Smith gets after it on the defensive end, handles the ball very efficiently, and knows how to distribute the shots amongst his teammates.

Mike Thorpe, Newton North High School – Thorpe is a skilled lead guard with a scorer’s mentality.  He shoots a very good ball from the perimeter, knows how to come off screens, and is a true combo who can play on or off the ball.

Matt Ellis, Westford Academy – Another shot-maker who can’t be left un-checked on the perimeter, Ellis made open threes and pulled up in transition while demonstrating his typically heady feel for the game and high basketball I.Q.

Chris Lee, Lexington High School – A man among boys in the paint, Lee has tremendous upper body strength along with big time bounce.  He dominated the interior, going through contact for a variety of impressive finishes at the rim.

Kevin LaFrancis, Acton-Boxboro High School – Not the type of guy who wows you with any one aspect of his game, LaFrancis just has a way of getting things done by finding ways to score from inside of 15 feet and getting himself to the free-throw line.

Pete Miller, Northfield Mount Hermon School – A big man with upside, Miller utilized post break down drills to showcase a variety of tools at his disposal while showcasing his mobility once the five on five action began.

Craig Luchenat, Andover High School – He’s one of those guys who is sneaky good in that he can do a number of things well over the course of the game.  He made different types of shots, surprised with some handle, and threw a couple of nice passes.

Joe Glynn, Cardinal Spellman High School – Consistently impressive throughout the evening, Glynn arrived with reportedly good college interest and presumably left with more thanks to his big body, bouncy athleticism, and ability to get up and down the floor.