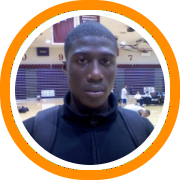 The Massachusetts and New Hampshire High School Basketball Report held their second annual all-star game on Sunday night, playing host to the top freshmen, sophomores, and juniors from the two states.  Here’s a look at who stood out during the action:

Akosa Maduegbunam, Charlestown – His jumper has become a weapon as Maduegbunam shoots a soft ball with great backspin from deep range, but don’t sleep on his athleticism or he’ll rise up to throw down some explosive finishes as he did at one point in the second half.

Javon Williams, Nashua North – The talent is undeniable for this guard with a powerful body, good looking shooting stroke, and super quick cross but consistency will be key down the stretch to see if he can turn potential into production.

Adam Bramanti, Masconomet – His style game doesn’t always show well in this type setting as he is a heady and skilled guard who is at his best in structure, but his frame was noticeably stronger than it was this fall as his body is starting to catch up with the rest of his game.

Noah Vonleh, Haverhill – Consistent development continues to be the theme for Vonleh.  As usual he made a few highlight reel plays that no one else in the gym could have made, but the most notable development was a cleaner release on his deep jumper.

Jared Terrell, Weymouth – He goes to the rim like a runaway dump truck, charging full steam ahead with his strong body and daring defenders to come into his path.  Hands down the best open floor player there was at the event.

Dimitri Floras, Merrimack – Attacking lead guard who loves to play off the bounce and does his best damage with his hesitation move.  His mid-range pull-up was most impressive showing an ability to stop quickly and get nice loft and touch on his ball.

Malik James, Brighton – It was our first look at this young guard and we came away impressed with his instincts at the point as he has good vision and poise, understands how to distribute the ball, but is still capable of creating a shot when no receivers are available.

Aaron Calixte, Stoughton – A power guard with a long frame, Calixte has the physical tools to dominate opposing guards in his peer group.  Add that to an improved jumper and you have a recipe for a much improved player.

Travis Descoteaux, Trinity – He turned in as efficient of a performance as there was in the sophomore game, using a polished handle to play through contact, get himself to the rim, or into his pull-up game where he was a threat to 22 feet.

Derek Collins, North Andover – Content to bomb away from long range early in the game, Collins demonstrated his shooting stroke early only to come back with his dribble drive game later on in the day.

Patrick Benzan, Roxbury Latin – Would have been our MVP choice in the freshmen game as he had the ball on a string with his handle, constantly getting himself into the lane and making plays for himself and his teammates with his bounce.

Jalen Adams, Melrose – A super smooth guard who played with both the sophomores and the juniors, Adams gets wherever he wants with his dribble and is a consistent jumper away from being a big time scorer in the backcourt.

Aaron Falzon, Newton North – Undeniably one of the top prospects in the game, Falzon showed flashes with turn-around jumpers and mini hooks on the block as well as long outlet passes that were on the money to fuel the break.

Shane Farley, Burlington – He caught our attention early and held it throughout the game showing a solid floor game, tight and compact handle, and a variety of good scoring moves with and without the ball in his hands.

Nick Cambio, Central Catholic – Good looking young forward with the size and strength to be productive in the paint and emerging face-up skills on the perimeter, handling and passing a little bit in the open floor and stretching to the arc with his shot.

Richard Santos, Whitinsville Christian – Has a unique understanding of how to run a team for a young player – handles with both hands, plays strong with the ball, distributes, sets good screens, and knows how to play.