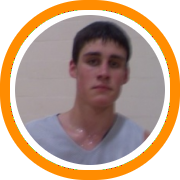 Loomis Chaffee post-graduate John Nielsen has made a verbal commitment to attend St. Anselm’s College next year on a full basketball scholarship.

Nielsen arrived at Loomis this fall after a tremendous two sport career at Port Jefferson High School in New York.

As the quarterback of the football team, Nielsen earned All-Suffolk County honors while leading his team to a 6-3 record.

But his biggest success always took place on the basketball court.  The six-foot-two shooting guard led Port Jefferson to back to back Suffolk Class C championships in his junior and senior seasons while earning all county honors in both years.  As a senior Nielsen averaged 22.4 points per game in addition to 6.4 assists and 4.6 rebounds, which was enough to warrant New York All-State honors.

The New England Recruiting Report got their first look at Nielsen at the Hoop Mountain Academic All-American Camp last summer where he stood out as one of the best pure shooters in the field.

Nielsen has continued to stand out since arriving at Loomis this year.  The Pelicans are off to a 3-3 start to the season as they look to defend their Western New England Crown and their post-grad shooting guard has been the cornerstone of their success.

It isn’t a stretch to say that Nielsen is among the best pure shooters in all of New England as he is equally lethal spotting up, coming off screens, or pulling up off the dribble.

“I chose St. A’s because I felt comfortable with the coaching staff and I felt it was a great fit overall,” Nielsen told the New England Recruiting Report.