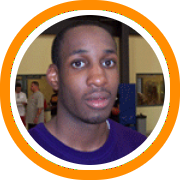 Thursday morning Mike Moore arrived at Hillhouse High School as he does on every other school day.  But this day was different as he had a press conference scheduled later that afternoon to announce his college selection.  By then it was common knowledge that the 6’5 guard had narrowed his options down to Fordham and Drexel, although no one seemed to know which school he would choose.
In fact, only a few short hours before the press conference was set to begin, Moore hadn’t told anyone what his decision would be, not his mother Barbara Vereen, his high school coach Kermit Carolina, or even Drexel Head Coach Bruiser Flint or Fordham Head Coach Derek Whittenburg.
So when Moore finally stepped up to the podium, put on a Fordham hat, and pledged his commitment to the Rams program, it was quite an exciting moment for the Hillhouse senior and the 100 plus people who had gathered in the school’s library to hear his announcement.
Moore cited the academic reputation of the school during his press conference as the main deciding factor.
“When you mention Fordham the first thing that comes to people’s minds is not basketball, but academics,” he said.
Carolina echoed those sentiments while also noting what an exciting time it was for the Fordham basketball program.
“When he graduates, if he never bounces another basketball, he can use that Fordham degree and connections from the alumni to profit his career,” he said.  “He is going to a program on the rise with a strong senior class coming back.  When they graduate, he will have an opportunity to be one of the key components for the next group.”
Fordham wrapped up the 2006-07 season with an overall record of 18-11 including a 4th place finish of 10-6 in the Atlantic 10 Conference.  With all five starters returning they should be one of the conference’s pre-season favorites to begin next season.
In Moore, the Rams have landed a versatile and talented player who came on strong during his senior season.  As the only returning starter from Hillhouse’s state championship team a year ago, he was a marked man all year long.  But to his credit he responded to the challenge averaging nearly 20 points, 10 rebounds, and 4 assists per game en route to earning the New Haven Register’s player of the year award.  The year culminated with a 21 point MVP performance as Hillhouse won their second straight state championship.
What makes Moore so intriguing is the fact that he is a player who has continued to improve and add new dimensions to his game.  While his mid-range game has always been his bread and butter, this year he also became a much more consistent threat from the three-point line while also improving his ability to create for himself and his teammates off the dribble.  Now, if he can take the final step and add some muscle to his frame he should be well on his way to making a   significant contribution for the Rams as they continue their climb up the Atlantic 10 Conference.
In Other News