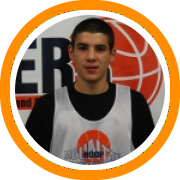 35 out of 121 campers showed up to the early morning workout. That is about 29 percent of the camp. About half of the early morning participants were playing in drills run by coaches. Others were merely shooting around or even sitting on the sidelines. If you divide that previous percentage in half, you are looking at 14.5 percent of campers actually looking to get better.

This game could have been titled “USA vs. Canada” as the Hawks were loaded with Canadian talent. The Nets, however, got off to a hot 10-2 start lead by Most Outstanding Player Jaime Carey. Their team attacked the basket with ferocity and closed out on shooters well to go up 15-6 in after the first quarter.

The Hawks then decided to give the Nets a taste of their own medicine. Jean-Christophe Cupani and Matthieu Ayotte finished a series of and-one lay-ups. They did not take one three pointer in the quarter and ended up leading 26-24 going into the half.

In the second half, Nets forward Ryan Brown was slashing through the lane and finishing everything. Cupani and Ayotte continued their acrobatic finishes as well and this game went down to the buzzer. With 14 seconds remaining, Brown finished a lay-up that won them the game.

The Kings clearly had the size advantage over the Thunder and it showed early on. Shyheim Hicks and Tyrique Jenkins were dominant early on, looking like men amongst boys.

The Thunder did not let the early ten point lead faze them though. Matt Ricci crashed the boards and made baskets in transition and the half court to make it a 22-17 game at the half.

Then, Thunder’s Samuel Chaput was doing everything in his power to help his team gain the lead. Whether he was slashing and dishing or draining pull-ups and runners, Chaput kept the crowd amused. One time, he even did a Rajon Rondo fake behind the back pass to score a lay-up.

After a way, Geo Baker began to step it up on the defensive and got many steals to make it a tight game. In the last 40 seconds, Ricci scored an and-one lay-up to put his team up by four and grabbed a rebound at the end to seal the deal.

Ikenna Ndugba - A mature guard with a nice pull-up jump shot. Ndugba handles pressure well, even when his defenders are all over him.

Will Johnson - Impressed at the conditioning station. Was one of the most in-shape players at camp.

Mitchell Keating - The big point guard with a strong frame has a knack for getting to the basket.

Tadarius Randolph - A point guard who knows the value of taking his time on offense.

Zach Jones - Had an impressive put back lay up on a missed free throw. His energetic type of play.

Xander Livingston - A young guard who displayed improvement at driving to the basket on Day 2.

Harry Mackinlay and Aidan Wright - These two were the first players in the gym for the option workout, arriving at 6:45. They got up a half hour earlier than everyone else and it showed in their play that their offense came along better as the day went on.

Luke Rosinski - This combo forward displayed a nice inside and outside game.