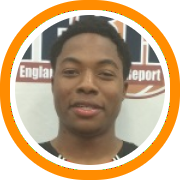 NERR contributor Mike Yagmin has been front and center at Springfield College all weekend long for the Spalding Hoophall Classic to provide recaps of the local teams in action.

In the HoopHall's premier matchup on Saturday night, Sacred Heart (Waterbury) took on Foothills Christian from California. The game featured two of the consensus top-25 players in the country, TJ Leaf and Mustapha Heron, going blow for blow for 32 minutes in front of a Heart-heavy crowd that made their presence felt late.

Foothills got out to a quick 13-point lead in the 1st quarter with Leaf scoring down low and facilitating from the post. Sacred Heart stormed back, which became a pattern throughout the game, as Tyrn Flowers showed off his smooth stroke from long distance. After Sacred Heart eventually cut the Foothills lead to 32-30 midway through the second quarter, Leaf's running mates once again picked up the pace and knocked down consecutive 3's courtesy of pinpoint passes from the UCLA-bound big man in the post.

With a 45-35 lead coming out of the locker room at halftime, Leaf used the 3rd quarter to put on an absolute clinic. If he wasn't throwing precise passes from the pinch post, Leaf was using his soft shooting stroke and nifty footwork to score both in the post and from long distance. With Sacred Heart's defense sagging with the intent on stopping Leaf, Luis Salgado and company took advantage of open three after open three and hit ridiculous 15 out of 22 from beyond the arch, which resulted in a 69-50 Foothills lead at the end of the 3rd quarter.

With the crowd quiet after Foothills long distance display, Sacred Heart diligently chipped away at the deficit throughout the fourth quarter. Mustapha Heron came alive a couple minutes in and gave the Hearts crowd a reason to start getting raucous when he hit a trey to cut the lead to 79-69 with just over a minute left. After a turnover resulted in a Charles Fisher layup and another Flowers three brought the score to 79-74, Heron really turned up his game and the crowd's volume.

Heron hit a deep three after the Hearts pressure turned Foothills over, cutting the lead to 79-77. Sacred Heart fouled and sent Salgado to the line, where he hit one of two making the score 80-77. Without hesitation, Heron brought the ball up court and proceeded to hit a 24-ft dagger to tie the score with 15 seconds remaining.

On the ensuing Foothills possession, Sacred Heart trapped 5'7" guard Jaren Naffarrete at half court but a silly foul with 4 seconds left sent him to the line. The little guy stepped to the line with the guts of a burglar and sunk both free throws to give Foothills an 82-80 lead. After a desperation heave by Heron as the clock ran out, Foothills preserved that lead and walked away with a victory.

Leaf played the most efficient game of the day at the HoopHall, scoring 30 points on 13-18 shooting to go along with 10 rebounds and 7 assists. His vision and ability to hit open teammates from the post was as impressive as his shot selection and steady 3-pt stroke. Heron lead all scorers with 31 points (4-8 beyond the arch) while battling in the paint for 10 rebounds and dishing out 4 assists. Tyrn Flowers once again proved that UMass received one of the gems of the late recruiting period, dropping 18 points on 7-12 shooting (4-7 3-pt) with 5 rebounds and 2 blocks.

In Saturday's nightcap, Weaver (Hartford) took the court against St Raymond's from New York City. Weaver jumped out to an early lead and held that margin throughout the first half. St. Ray’s would gradually chip away in the second, but ultimately couldn’t come all the way back, giving Weaver an impressive 76-70 decision over one of NYC’s proudest programs.

Chaylyn Martin played his usual brand of tenacious basketball and opened the eyes of a few college coaches who decided to take in the finale, en route to 28 points, 16 rebounds, and 3 assists. Martin, who has improved exponentially in the last year, did just about everything and made some key plays for the Beavers down the stretch.

Sunday at the HoopHall usually showcases some of the most talented teams in New England and this year was no different. The highlighted local matchup during the afternoon session featured national powerhouse Brewster Academy and an extremely talented Vermont Academy looking to establish themselves on that level as well.

Bruce Brown set the tone early for Vermont, finishing fast breaks created off turnovers with emphatic slams that brought the Springfield crowd to their feet on multiple occasions. Brown's ability to slice through double teams allowed him to finish in traffic throughout the first half, resulting in a 43-37 Vermont lead heading into the break.

While Brewster couldn't manage to get into an offensive flow in the first half, it was a completely different story coming out of the locker room. Jason Smith's team showed a sense of urgency, as the unsigned duo of Alpha Diallo and Taurean Thompson showed why they've been two of the most coveted prospects in the nation heading into the late signing period. Diallo showed of his entire repertoire, scoring from all three levels in key moments during a second half run and eventually helped Brewster tied the score at 77-77 with a little over 3 minutes left.

Thompson controlled the paint and disrupted everything that was funneled his way on the defensive end and made the most of his teammates missed opportunities, blocking 6 shots and grabbing 16 rebounds on the afternoon.

Brown did everything he possibly could to keep Vermont on top and succeeded for most of the game, until Diallo's dagger three and Thompson's hammer dunk put Brewster up 82-77, where they stayed for the remainder of the game en route to a 94-87 victory. Brown finished with a game-high 37 points, 22 of which came in the paint, on an extremely efficient 15-24 from the field including 3-7 from deep, to go along with 8 rebounds, 3 steals and 2 assists.

Vermont's 6'7" junior wing Christian David once again showed why his stock has risen dramatically during his first season in New England and finished with 14 points. David was active on the boards, deflected multiple passes to disrupt Brewster's offense in the first half, and also battled with Brewster's bigs to corral 6 rebounds. Xavier-bound big man Tyrique Jones turned in his latest double-double, tallying 11 points and 10 boards. Patrick Fisher found open man after open man, turning in a game high 11 assists with 5 points and 5 rebounds.

While Vermont played extremely well, the story down the stretch was Brewster's Diallo and Thompson. After turning up his game when it mattered most, Diallo finished with 21 points on a ridiculously efficient 8-11 shooting, including perfect performance from three (3-3) and from the line (2-2). Thompson played like a man on a mission throughout, scoring 23 points and dished out 4 assists, which fit nicely next to his 16 rebounds and 6 blocks. Colorado-bound guard Deleon Brown finished with 10 points and 5 assists, while Malik Fitts and Rapolas Ivanauskas contributed 12 and 11 points respectively for Brewster.

With John Calipari watching closely for both personal and professional reasons, MacDuffie pulled out an 8-point overtime victory on Saturday morning. One of Coach Cal's latest prized recruits, Wilbraham and USA Basketball's Wenyen Gabriel, used his frenetic style of play to fill the box score and eventually helped his team force overtime with a near triple double. Unfortunately for Gabriel, his 18 points, 13 rebounds and 8 blocks were not enough to secure a win. Brad Calipari spoiled his day with a cold-hearted dagger three in overtime to put his MacDuffie squad up to stay. Calipari won Player of the Game honors, finishing with 17 points (5-12 3pt) and 5 rebounds. MacDuffie's Jordy Tshimanga took advantage of his one on one duel with Gabriel and played inspired ball throughout the game, resulting in 13 points, 19 boards, and 3 blocks. Brendan Vessichio was named the HoopHall's Player of the Game for Wilbraham after scoring 22 points and grabbing 6 rebounds.

In Saturday's first game, and a rematch of last year’s Class A final, Williston's 6'5" senior wing Jamaal David scored 13 points, grabbed 4 rebounds and dished out a pair of assists, leading his team to a victory over Suffield Academy. Suffield's Miye Oni struggled from the field but buried 8 of his 10 free throws and finished with a game high 15 points. Junior forward Garret Stephenson scored 9 points and hauled in 7 boards for Suffield, while Griffin Kornaker dished out 6 assists to go along with 13 points. 6'8" big man Matt Folger scored 10 points on a clean 5-7 shooting and blocked 3 shots for Williston.