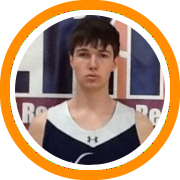 Super Week 2 kicked off Sunday afternoon at Hoop Mountain at the location of Roger Williams University. A lot of exciting talent was displayed on the first day of scrimmages, foreshadowing what should be a very competitive week of games. Some of the players who stood out early on were:

Thomas Rivard, 2013 (Worcester Academy) – Rivard’s all around skill set is very impressive. He is able to get to the basket with his length and body control, and can finish in traffic. He also portrays extreme intelligence, making smart plays every time he touches the ball. When defenders retreat he is able to knock down mid range jumpers with regularity.

Isaiah Robinson, 2014 (Salisbury) – As an undersized big, Robinson uses his wide frame to clear space and create opportunities for himself. He is exceptional at finishing around the rim and plays with extreme intensity.

Ryan Walsh, 2013 (Dighton Rehboth HS) – His ability to run the offense with extreme preciseness is an intangible that makes him such an effective player. Aside from that, he can attack the rim as well as shoot from the outside. His understanding of the proper game pace is another one of his abilities.

Andrew Kaufmann, 2014 (Rivers) – With his height and length he is able to knock down shots over opponents. Andrew can also defend several different positions on the floor and is effective in transition.

Owen Murphy, 2013 (Plymouth North HS) – Murphy is a forward who runs the floor well and is extremely athletic. He also defends well due to his wingspan. If he improves as a post up player, his value could increase greatly.

Matthew Laffin, 2013 (Northwest Catholic HS) – Another good point guard who gets out in transition and finds the open man. He can also maneuver his way inside and finish for himself.

John Spears, 2014 (Pingree) – With one of the best handles in camp, he is unbelievably effective pushing the ball up court and finding open men. His vision is tremendous and he is smart with the ball. On the other end, Spears is a menace creating turnovers and turning them into points.

Fredens Deneus, 2015 (Cambrige Ringe and Latin) – Deneus is a terrific athlete who has the ability to sky above defenders on jump shots and attacks to the rim. His mid range game is very smooth and an important part of his repertoire. He is also a strong defender and can guard both guards and forwards.

Devin Stallings, 2013 (Crosby HS) – The theme of this week’s camp seems to be fast paced offense, and Devin is another swingman/forward who can run the floor and finish in traffic. In the half court game, he is a willing passer and gives his teammates opportunities to score.

Robert Skinner, 2013 (Gilbert HS) – Skinner is a quick guard with excellent handle and control of the ball. His jumper is respectable and keeps defends honest. He causes problems defensively with his athleticism and intensity.

Matt Barr, 2014 (Cushing Academy) – Barr had an impressive day of beating defenders off the dribble and attacking the basket. He was able to finish with regularity, which forced the defense to collapse and leave open shooters.