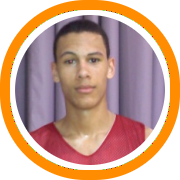 The Hoop Mountain classics are almost an institution in New England, annually hosting loads of division II and III coaches in the fall and spring.  On Friday night, the event returned to Mass Premier Courts, filling the gym with solid prospects and college coaches alike.

Here’s a look at some of the notes on the most productive players in action:

Ary Bibbens, 6’3”- Good 2/3 man who is capable of scoring from anywhere on the floor; he possesses solid moves off the dribble and is a capable defender who plays with energy.

Joe Carty, 6’6” Sr, Natick High- nothing flashy, but certainly more than solid; possesses a good combination of finesse and strength with his moves inside as well as a solid mid-range game.

Marcus Faison, 6’5”, CRLS- solid inside player who is capable of going to his left; possesses good poise on the defensive end and has a knack for getting on the glass.

Connor Reardon, 6’6”, Pingree- versatile player who is capable of playing multiple positions depending on match-ups; strength is slashing and getting to the rim to finish, although he does have a nice touch on his outside game.

Kyle Lentini, 6’6”, Pingree- solid wide bodied forward who can certainly hold his own on the inside and has nice finesse from the outside; runs the floor well with his “tight end” frame.

Liam Ellis, 5’11”, Turner’s Falls- guard who makes good decisions already as a sophomore and has some great potential to grow and become better. Has command of himself and his moves on the court; not afraid to penetrate the defense.

Sam Johnson, 6’6”, Sr. Cape Cod Academy- wide bodied strong, skilled forward. Has a knack for carving out position inside and a baseline hook shot as a go to move. Also shows sign of a mid-range game

Justin Pollard, 6’3”- well statured off guard who is capable of hitting outside shots; also can play undersized inside as his strength allows him to be effective.

Malin Segal, 5’6”, Jr, Concord Academy- smaller type guard whose asset is his change of speed ability, does a good job looking for the up quick in transition and is not afraid to penetrate.

Justin Assad, 6’3”, Fr. Pingree- much like his teammate Reardon, his strength lies in slashing and getting to rim for finishes. Also is capable on the defensive end and rebounding.

Kyle Howes, 6’2”, Jr, Lawrence Academy- long and strong off guard who is capable of getting to the rim, finishing in traffic, and can shoot the ball as well. One of the better defenders all night long on the ball.

Connor O’Brien, 6’5”, Jr, Thayer Academy- long, lanky and skilled off guard. Deceptively quick and can score both slashing to the rim and from the outside.

Malcolm Smith, 6’3”, Sr, Winchendon School- certainly the most impressive of the night; plays with outstanding energy and can score from anywhere on the floor on both sides of the court. Pest on defense

David Giribaldi, Andover- impactful player who does a great job of staying within himself and making efficient plays. Tough inside and also has a mid-range game. Makes efficient decisions.

Mickey Lyons, 6’3”, So, Lexington- solid off guard who makes plays both inside and out off of shots and penetration. Efficient at his craft.

Cesar Fulcar, 5’10”, Jr, Watertown-solid in all aspects of the game from the guard spot; makes good decisions and can put the ball in the hoop. Also has the ability to penetrate and score.

Keyma Cannon, 5’11” Jr, Braintree- quick guard possesses added gear on both ends of the floor; makes plays off the dribble to get himself into the lane and defends with intensity.

TreVon Betts, 5’10”, Jr, Brockton- playmaking guard has a knack for finding his way to the rim in the open floor and also owns the upper body strength to finish a percentage of plays once he gets there.