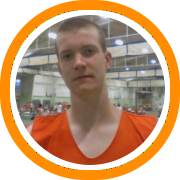 The theme of this year's Hoop Mountain Spring Classic was the uncovering of previously unknown prospects.  While a fair share of big names ran up and down the courts at Stonehill College what really caught the eye of the lines of college coaches were all of the relatively unknown players who proved themselves to be college prospects on Friday night.

Here is a look at who shined:

Andrew McCarthy: Center
Height: 7’0
School: Loomis Chaffee 2010
A big, physical senior center, McCarthy alters shots defensively, runs the floor well and finishes with both hands around the rim. He has good footwork and back to the basket moves.

Colin Richey: Shooting Guard
Height: 6’1
School: Whitinsville Christian School 2013
Richey is a freshman combo guard with a high basketball IQ who has the ability to attack the basket, handles the ball with confidence and works hard defensively.

Adrian Oliveira: Point Guard
Height: 6’0
School: Cumberland High School 2012
Oliveira is a point guard who impresses with his athletic ability and willingness to attack his matchups and score. A complete offensive player, he not only can score in bunches but can also set his teammates up for easy baskets.

Jordan Rezendes: Shooting Guard
Height: 6’1
School: Wareham High School  2010
A superior athlete, Rezende is an excellent finisher who is dangerous in transition and finishes above the rim.

Evan Hole: Shooting Guard
Height: 6’3
School: Portsmouth High School 2012
Evan Hole is a sophomore shooting guard who moves very well without the ball, making great cuts to get open and score. With the ball in his hands, he makes great decisions and rarely commits turnovers or takes bad shots.

Chris Sherwood: Small Forward
Height: 6’5
School: Brimmer and May
Sherwood is a very athletic combo forward who finishes with high flying dunks above the rim. Sherwood is strong inside but also possesses the ability to shoot from three point range.

Isaac Medeiros: Power Forward
Height: 6’5
School: Johnston High School 2011
Medeiros is a post player with superior strength and the ability to finish confidently with both hands around the basket. He also handles the ball well in transition and is a better dribbler then most power forwards.

Jaquille Taylor: Center
Height: 6’8
School: Rindge 2013
Taylor is a freshman center who is very skilled in the post. He has great post moves and footwork for his age, alters shots on the defensive end and is a strong finisher.

Din Moore: Shooting Guard
Height: 6’3
School: Kimball Union Academy 2010
Moore is an athletic shooting guard with a great ability to create his own with his quickness and strength. He has great dribble moves to go to when attacking his man off the bounce.

Ousmane Drame: Center
Height: 6’8
New Mission 2010
Drame is a physical presence inside who is a great rebounder on both ends of the floor. He does a good job offensively getting into good position in the post, making it easy for him to receive the ball and score.

Brian Malger: Point Guard
Height: 5’6
School: Quincy High School 2011
Malger is a junior point guard who uses his quickness to create for himself and to set up his teammates. He works hard and is a scrappy on ball defender.

Trae Jones: Point Guard
Height: 5’8
School: Reading High School 2011
A lightning quick floor general, Jones is a smart player who handles the ball well and makes plays to set up his teammates as well as attacking the rim and scoring himself.

Matthew Kneece: Center
Height: 6’7
School: Shrewsbury High School 2011
Kneece is a skilled big man who has a soft touch, great post moves, and finishes with both hands in traffic around the rim.

Steven Parr: Shooting Guard
Height: 6’0
School: Saint Andrews 2013
Parr is a freshman shooting guard with the ability to score the ball in many different ways. He is crafty with the ball in his hands, moves well without it, and can shoot off the dribble or off the catch.

Jose Vazquez: Small Forward
Height: 6’4
School: Snowden International
Vazquez is an athletic small forward who likes to get out and lead the break and gets after it defensively.

Drew Crudup: Point Guard
Height: 6’
School: Career High School 2011
Crudup is a point guard who is smart with the ball, doesn’t turn it over and uses his quickness to beat his man off the dribble and attack the rim.

Kourtney Wornum-Parker: Small Forward
Height: 6’5
School: Newton North High School 2010
Wornum-Parker is an athletic forward who uses his strength inside, but is also a good enough dribbler to handle the ball and is quick enough to blow by his man and make a play toward the hoop.

Evander Machuca: Point Guard
Height: 5’10
School: Holyoke High School 2013
Machuca is a freshman scoring point guard who can shoot from three, attacks the rim well and makes plays for others, and is an excellent on ball defender.

Mike Rubin: Point Guard
Height: 5’11
School: Bedford High School 2010
Mike Rubin is a senior point guard who always has his head up while dribbling and does a great job finding the open man both in transition and in the half court.

Matt Sharma: Power Forward
Height: 6’6
School: Lexington High School
Sharma is a junior power forward who impressed with his strength at the defensive end and on the boards. On the offensive end, he is crafty in the paint and has the ability to face-up in the post and attack.

John King: Small Forward
Height: 6’4
School: The Prout School 2011
John King is an excellent shooter with range out to the deep three. On the defensive end, his long arms help him block a lot of shots and deflect passes.

Sergio Colon: Power Forward
Height: 6’6
School: Nashoba Regional 2012
Wasserman is a sophomore power forward who is very active without the ball, is a good offensive rebounder and finishes with a soft touch in the paint.

Jason Nunes: Point Guard
Height: 5’9
School: Rindge 2010
Nunes is a scoring point guard with a great midrange game and a quick release. Nunes does well creating space for himself to get his jumper off in traffic.

Lewis Jennings: Shooting Guard
Height: 6’3
School: Bellingham High School 2010
Jennings is a good three point shooter, has a good midrange game, and is an excellent passer in transition. On the defensive end, he works hard, deflects a lot of passes and forces turnovers.

Patrick Marchand: Power Forward
Height: 6’6
School: Cranston East High School 2012
Marchand is a wide bodied sophomore power forward who rebounds well on both ends of the floor, has good feet and good hands in the post, and has the ability to step out and knock down the open three.

Josh DiPietro: Point Guard
Height: 5’10
School: The Prout School 2013
Josh is a freshman point guard who can score the ball many different ways and isn’t afraid to attack the rim in traffic. He is a playmaking guard who is a capable of making great passes on the break.

Patrick Hession: Shooting Guard
Height: 6’2
School: Westborough High School 2011
Patrick is a great shooter with range out to the three and a quick release off the catch.

Eric Alleyne: Point Guard
Height: 5’10
School: Brimmer and May 2010
Alleyne does a good job setting up his teammates with his pinpoint passes. He is especially good at penetrating and kicking out to shooters on the perimeter.

C.J. Moss: Point Guard
Height: 6’0
School: Taft Academy 2011
Moss is a very impressive junior point guard. He is a floor general who always has his head up and finds the open player. Every time out on the court it seemed as though he was picking up multiple assists.