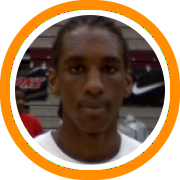 Hoop Mountain’s New England Spring Classic was a tremendous success as the talent on hand was the best this event has seen in recent years.  Not only were there a tremendous amount of potential division III prospects in attendance, but there was also several potential scholarship players competing as well.  Here is a breakdown of some of the players who stood out:

Keith Brown – Marlborough HS (Marlborough, MA):  The junior guard did a little bit of everything in the game we were watching as he broke his man down off the dribble with good ball skills and a long first step, pulled up from the three-point line and in, and finished above the rim.

James Marcellus – Bridgton Academy (North Bridgton, ME):  The former Archbishop Williams big man was at his best when catching the ball on the low block and then facing up to attack his defender as he showed a quick first step and a good ability to finish in stride.

Brendan Monteiro – Catholic Memorial HS (West Roxbury, MA):  Fresh off his state championship, Monteiro is still playing some very impressive basketball.  He had great speed when pushing the ball up the floor, a good stroke from behind the three-point line, and a smooth mid-range game.

Romeo Diaz – Methuen HS (Methuan, MA):  One of the night’s best performers was showcasing his full offensive repertoire.  In the first set of games he knocked down two three-pointers, changed speeds off the bounce to create his own shot, and had a break away dunk.

Mike Clifford – Bishop Fenwick HS (Peabody, MA):  Clifford was impressive tonight as he combines good size with an excellent work ethic.  He was very active around the rim, rebounding on both ends, and an opportunistic scorer.

Josh Paulino – Pomfret Academy (Pomfret, CT):  One of several unsigned seniors (or in this case post-graduates) who are potential scholarship candidates.  He was at his best off the dribble as he was good with the ball and very crafty inside the lane.

Danquah Rawlins – Tabor Academy (Marion, MA):  The repeat junior does his best work in the open floor, which makes him ideally suited for showcase style events.  He was equally effective on the defensive end as he got into passing lanes and even took the only charge of the night.

Dominic Scurry – Tilton School (Tilton, NH):  Scurry is said to be getting interest on both the division II and III level and he showed why Friday night as he was able to get into the lane with his right to left cross and then score with a soft floater.

George Jordan – Marlborough HS (Marlborough, MA):  Another unsigned senior who did very well for himself.  Despite getting limited touches he was active on the glass, physical in the paint, and came up with the play of the night as he caught a 25 foot alley-oop pass for a powerful dunk.

Alec Giusti – Foran School (Litchfield, CT):  He may have been the hardest working player of the 150 in the gym as he goes after every rebound and loose ball with reckless abandon.  If that weren’t enough the athletic 6’6” forward ran the floor, finished in transition, and made shots from 15 feet and in.

Tony Dolphin – Worcester Academy (Worcester, MA):  He put on a good display of athleticism and improved skill as he rebounded the ball above the rim, made open shots to the three-point line, and finished smoothly in the open floor.

Paris Massey – Boston English HS (Boston, MA):  He was pretty good on Sunday when we watched him at the Rhode Island Breakers showcase, but he was even better tonight.  He was a major presence on the defensive end with his shot blocking ability and also scored consistently with his back to the basket.

Toso Adebamowo – Marianapolis Prep (Thompson, CT):  He undoubtedly has scholarship level talent as he is an impressive athlete who can both put it on the floor and make shots from behind the arc.  Now it’s just a matter of making better decisions and not forcing shots.

Peterson Bernard – Madison Park HS (Boston, MA):  Word of advice to defenders…if you allow him to establish deep post position you have no chance…that may be easier said then done as he is one of the strongest and most physical big men in the region.

Greg Jacques – St. Sebastian’s School (Needham, MA):  He made some spectacular passes tonight…especially in the open floor.  He may be a diamond in the rough for a high academic low major program.

Mick Kelly – Rham HS (Hebron, CT):  The youngster was at a size and strength disadvantage against his older competition tonight but that didn’t stop him from knocking down four three-pointers in one game and showing an all around good feel.

Harvey Pannell – Master’s School (West Simsbury, CT):  His biggest strength has always been his smooth dribble drive game.  While that continued tonight he also hit the open man and finished quickly inside the lane.

Joe Saunders – Rogers HS (Newport, RI):  The unsigned senior offers the type of intangibles that all coaches look for in their point guards as he is extremely tough, a natural leader, and willing to do the little things to make his team successful.

Allen Williamson – Pingree School (South Hamilton, MA):  The powerful and athletic forward impressed with his versatility as he could put the ball on the floor, finish in transition, or go to the low block with equal efficiency.

Fred Boateng (Hamden HS, Hamden CT) is a nice division III type combo-guard…Matthew Bodden (Cambridge Rindge & Latin, Cambridge MA) was again powerful taking the ball to the basket…John Pinone (Glastonbury HS, Glastonbury, CT) was a mismatch problem as he battled inside and made open 3’s…Cliff Celestin (Tabor Academy, Marion, MA) had great quickness with the ball and at the defensive end…Jerald Cohen (Bedford HS, Bedford MA) finished smoothly in the open floor and knocked down the 3 ball…Uche Egesionu (Trinity Catholic, Newton MA) scored over both shoulders in the post…Matt Gibson (Lexington Christian, Lexington MA) continued to be a playmaker with his passing ability…Oliver Hunter (Bishop Guertin HS, Nashua NH) showed some impressive bounce…Jon Karas (Glastonbury HS, Glastonbury CT) made open shots and also did some things off the dribble…Alex Levine (Weston HS, Weston MA) showed a nice perimeter touch for a big man…Francisco Luano (Boston Trinity, Boston MA) was one of the top prospects in the gym…Louis Montes (Brockton HS, Brockton MA) showed his strength and bounce with some powerful finishes…Tyler Patch (Seekonk HS, Seekonk MA) scored consistently on the night…Chris Quinn (Beaver Country Day, Chestnut Hill MA) went strong to the basket, moved well without the ball, and ran the court…Mike Rivera (Durfee HS, Durfee MA) continued to make plays with the ball in his hands…Jeff Pitkin (Glastonbury HS, Glastonbury, CT) scored and passed well off the dribble…Anthony Weeks (Worcester Academy, Worcester MA) showed his high basketball I.Q. as he made good decisions with the ball and got shots for his teammates…Mark Williams (Malden HS, Malden MA) finished strong inside and blocked shots…Cory Willis (St. Sebastian’s, Needham MA) played strong with the ball while also showing some creativity with the dribble...Tim Sartor shot the ball well from behind the three-point line...Marcus Armstrong is a lefty with good quickness and a nice jumper.