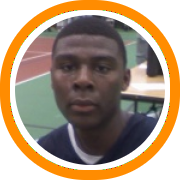 Every year the Hoop Mountain Invitational seems to get a little bit better as the event has established itself as one of the premier AAU tournaments in the northeast.  This year was no different as college coaches lined the walls of Stonehill College’s Sally Blair Ames Complex.

Although division I coaches weren’t allowed to attend, there were over 75 coaches in attendance on Saturday and an especially strong presence from division II schools, as the NE-10 was out in full force to check out the action.

The best game of the day came in the anticipated match-up between Expressions Elite and the Mass Rivals in the u16 division.

It was exactly two weeks ago that the Rivals 17-and-under team scored a huge win over the New England Playaz, and today the younger team got the opportunity to score a signature win of their own…and they didn’t disappoint.

The Rivals may not have the same number of big names as Expressions, but that didn’t make any difference on Saturday.  Simply put, the Rivals were the harder working and smarter team.  It was clear coming out of the gate that they had something to prove and over the course of the next 32 minutes they showed not only tremendous grit and toughness, but also excellent execution of their offense.

With the win, the Rivals may be on a crash course with the New York Panthers who also shined in the u16 division on Saturday.

The other major story of the tournament thus far has been the play of Jason Pranulis from the Western Connecticut Warriors.  A name not known by many coming into the tournament, ourselves included, Pranulis went off for 50 points on Friday night and followed it up Saturday morning with 46 more.  He’s got a strong 6’6” frame, is deceptively athletic, has a soft touch out to the three-point line with his southpaw stroke, and plays the game with absolute reckless abandon.

Laurent Rivard, Expressions Elite – Known as a big time shooter, Rivard had the whole game going on Saturday.  He no doubt made shots as usual, but really caught people’s attention when he threw down a hard dunk on a helpless defender’s head.

Corey Wright Jr., Expressions Elite – He was content to be a facilitator today and it certainly paid off for Expressions as they opened their first game on a 32-0 run.  Wright was breaking people down off the dribble, forcing the defense to collapse, and then picking them apart with his passing ability.

Ryan Romich, Expressions Elite – Romich was more aggressive looking for his shot as he converted in both the mid-range area and behind the three-point line while also running the floor hard as always and consequently picking up a number of easy points around the rim.

Billy Baron, Expressions Elite – He continues to be a valuable addition to this team and showed today that he and Wright could be very effective together in the backcourt because of his Wright’s ability to create off the dribble and Baron’s ability to make shots and/or attack close-outs.

Ryan Canty, MA Rivals – His size and athleticism alone are likely to earn him a scholarship and his stock will only continue to rise as his offensive game begins to blossom.  Highlights on Saturday were a two-handed dunk in congestion, a terrific blocked shot when rotating down from the free-throw line, and an offensive rebound tip-in in transition.

Robert Alers, RI Hawks – A talented offensive player who put the ball in the basket in a number of ways including pull-ups jumpers, occasional drives, and perimeter jump shots.

Bryan Vachon, RI Hawks – A steady guard from Bishop Hendricken, Vachon is a big time shot-maker who was virtually automatic from behind the arc when left unchecked.

Jevon Williams, CT Basketball Club – He had one of the best individual performances of the morning as he connected on six three-pointers and finished with 27 points to lead his squad to a huge win over the CT Northstars.

B.J. Cardarelli, CT Basketball Club – He’s really come along nicely in the last month as he continues to shoot it well from the perimeter but is now being assertive inside as well.  He had 21 in CBC’s first game.

Ishmael Kalilou, CT Basketball Club – A skilled face-up four-man who is deceptively athletic, Kalilou has a great touch anywhere inside 18 feet and is also a threat to rise up when the defender least expects it.

Tyrus Weaver, CT Basketball Club – Speaking of rising up, Weaver got a good rise out of the crowd this morning when the little guy showed big hops to get up and throw one down in transition.

Wes Clark, Visionary Basketball Club – He suffered a sprained ankle early in the first half but still fought his way through and finished with 19 points including a numbers of three-pointers to go along with some proficient footwork on the perimeter.

Brian Salzillo, CT Gold – A terrific three-point shooter with a pure stroke, Salzillo capitalized nicely on lunging defenders as he was attacking close-outs well and getting himself to the rim.

Eric Dubuque, Lone Wolf – He was connecting with his stroke early and often as he had four three-pointers before halftime of Lone Wolf’s opening round game.

Demir Smajovic, Lone Wolf – This was the second time we’ve seen him this spring and we continue to be impressed by his smooth shooting stroke as well as some craft getting to the rim and finishing creatively.

Brandon Sherrod, CT Basketball Academy – He was simply beasting people inside as the opposition didn’t have anyone big enough, strong enough, or tough enough to stop him from doing work both on the glass and also finishing around the rim.

Ethan Sperry, Northeast Basketball Club – The 6’5” big man from RHAM High School had a nice performance as about a dozen coaches looked on.  He went hard to the glass, used his body well in the paint, and made shots from the perimeter.

Darrell Highsmith, Northeast Basketball Club – An athletic slasher from Windham High School, Highsmith handled well in the open floor and was getting to the rim at will.

Joe Mussachia, MA Rivals – He’s not a pure shooter and he’s not an off the charts athlete, but this kid can score, especially in the mid-range area.  No one was more important for the Rivals in the second half than Mussachia who converted one four point play and also made a phenomenal pull-up jumper after stopping and reverse pivoting off the dribble.

Brian Miller, MA Rivals – He’s incredibly powerful for being just a sophomore with the toughness to match, but he’s also got a good feel for the game as well as he really knows how to use a screen on the perimeter.  He was great at times vs. Expressions.

Zach Hurynowicz, MA Rivals – Steady and consistent, he’s the consummate floor general.  He made one great move early in the day with a left-handed inside-out dribble into a lefty lay-up, but for the most part he’s content to distribute the ball and get his teammates shots.  Where he changed the game was on the defensive end where his quick hands ripped the opposition whenever they tried to cross him up.

Cedric Kuakumensah, MA Rivals – This was our first time seeing the big man from Worcester and it’s obvious he has a chance to be a very good player down the road thanks to his many physical tools, shot-blocking ability, and ability to go by opposing big men from the perimeter.

Donald Celestin, MA Rivals – He’s got a ton of ability and it was on display in stretches today as he went by people using his good handle and quick first step and also scored in the mid-range area by elevating over the defense for his pull-up.

Ricardo Ledo, Expressions Elite – Despite the loss, he was a bright spot for his team as he did a little bit of everything.  Two most impressive plays of the day were a thunderous dunk taking off just inside the elbow to finish the break and then a tremendous rip-through move leading to a running floater.

Alex Murphy, Expressions Elite – It certainly wasn’t his best game ever but we continue to like what we see as he’s attacking the defense at every opportunity, making plays for himself and others, and going to the free-throw line in high volume.

Joe Sharkey, Expressions Elite – Making his debut performance with this team, it will take some time for him to fit in, but his quick released pull-up jumper was enough to catch our eye.

Deric McCotrell, Expressions Elite – Provided a significant boost in the first half as he finished everything inside the lane and blocked shots.  His best play of the day came when catching the ball in the deep corner, taking one long dribble, elevating on one side of the rim, and finishing in mid-air on the other.

Tyler Olander, Expressions Elite – The future Worcester Academy big man continued to star with the u17 team as he excelled going from corner to corner, knocking down threes from either side and also stopping to post.

Jaymie Spears, MA Rivals – It wasn’t necessary the amount of points he scored on Saturday, it was the importance of them.  He seemed to come up with a big play or big shot whenever his team needed it the most and he’s clearly the catalyst for the Rivals u16 team.