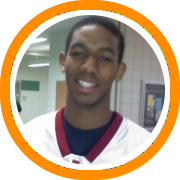 Some of the top talents in New England were on hand last night at Hoop Mountain’s Fall Classic at Mass Premier Courts in Foxboro. Dozens of Division 2 and 3 coaches from all over New England covered the gym. Out of the 180-some prospects in attendance, here are the players who impressed:

Jarred Reuter, 6’8 freshman, Tabor Academy-It was clear from the beginning that Reuter was the biggest name, and most impressive talent, at the event. He rebounded at an unbelievable rate, finished at a high level in the post, and consistently jump started fast breaks with his on-point outlet passes.

Dimitry Coronel, 6’4 senior, Tabor Academy-Dimitry scored pretty much whenever he wanted tonight. He showed off some highlight-reel dunks in transition and constantly beat defenders off the dribble. Dimity also did a great job of setting up teammates for baskets on the break.

Billy McDonald, 6’7 senior, North Haven High School-Billy may have been the most well-rounded prospect at the event. He knocked down several shots from far behind the three-point line, showing off his quick release. However, his combination of strength and athleticism is his best quality as a player. He made several plays far above the rim, rebounded at a high rate, and overall was fearless when driving to the rim off the dribble.

Steve Haladyna, 6’5 senior, St. John’s Prep-Several times Steve has been described as a player who is always in the right place at the right time. His instincts and nose for the ball are both tremendous. Steve made shots from all over the floor, whether it be from lay-ups, post moves inside, mid-range jumpers, or three-pointers. A scoring threat from anywhere on the floor.

Kyle Reardon, 6’4 senior, Rivers School-Excellent catch-and shoot player who also does more than his part defensively and on the glass. Showed he has definitely gotten better at taking defenders off the dribble.

Jacquil Taylor, 6’9 sophomore, Beaver Country Day School-Jacquil’s left hook in the post is unstoppable. He rebounded very well and was probably the best shot blocker at the event. With his length, athleticism, skill, and basketball IQ, the sky is the limit for this young man.

Victor Joshua, 6’3 senior, Hamden Hall-Victor could have taken almost anybody in the gym to the rim off the dribble; he constantly uses his quick first step to his advantage. He also knocked down mid-range and outside jumpers at an impressive rate.

Colin Richey, 6’2 junior, Whitinsville Christian School-Richey showed off many of the same talents we have seen in the past: consistent jumper, quick first step, and excellent playmaking ability, but last night he also showed off his very much improved athleticism and strength that will enable him to play at a higher level this season.

Zach Lewis, 6’3 senior, Northwest Catholic-Zach is a great one-on-one defender who uses his strength and athleticism to his advantage. He’s a tough finisher and good shooter who can play the shooting guard or small forward position.

Matt Daley, 6’8 senior, Taft School-Daley still has so much potential because of his length, skill, and IQ. Matt is a big man who moves well without the ball and boxes out hard. He and Kade Kager made a living off of pick-and-rolls at the event.

Malin Segal, 5’8 sophomore, Concord Academy-Though he has more growing to do at first glance, Segal was one of the toughest guards at the event. He has a quick, high release on his jumper, a tight handle, and is extremely crafty going to the rim-where he has no problem finishing around much bigger players.

Kade Kager, 6’1 junior, Taft School-Kade showed off some great athleticism and showed why he will undoubtedly drum up some more interest for himself this year. He rarely turns the ball over, will knock down the deep three, and attack the rim at will.

Thomas Rivard, 6’6 junior, Worcester Academy-Tom is a skilled big man who produces at a very consistent rate. He also moved well without the ball and was one of the better rebounders at the event.

Nizar Kapic, 6’5 senior, Hyde Prep-The only word to describe Nizar is: shooter. He will pull up from behind the three-point line on any given possession if he is left open; he was deadly from beyond the arc. Has a lot of length and showed the ability score going to the rim.

Luciano Martinez, 6'2 senior, University HS-He's a big point guard that sees over the defense and finds his teammates in scoring position.  He's also a "three range scorer" who can put points on the board at the rim, the mid-range area, or beyond the arc.

Jared Lewis, Malden Catholic-Very long player with an inside-outside game. Knocked down several shots from behind the arc.

Eddie Danek, Suffield High School-Scorer. Eddie has a consistent outside stroke and is fearless with the ball in his hands.

Michael Thorpe, Newton North High School-Combo guard with high skillset, he can shoot the three well and has a very reliable handle.

Myles Penniman, Lexington High School-Strong 6’7 big man who is at his best on the low block. Rebounded well and had a consistent scoring presence.

Jacek Louisville, Holy Name Central Catholic-Might have been the most athletic player in the building. Showed an improved handle and willingness to drive to the rim at any time.

Kadian Hall, University-Shot maker from the perimeter with a corresponding dribble drive game, complete with patented spin move inside the lane.

Curtis Howe, Cathedral-There were a couple games he played where Curtis was the toughest player on the floor to stop. He’s a crafty point guard who finishes everything at the rim and has a high release on his jumper.

Avalon Mclaren, Brockton High School-Young guard with a ton of potential. A great playmaking point who has the size, length, and intelligence to become an elite player

Maurice Taylor, Beaver Country Day School-No longer just a player with a ton of potential, Mo handled the ball well, rebounded with some of the best forwards at the event, and made some great cuts to get some points for himself.

Tyrell Henderson, University High School-Tyrell did it all at Hoop Mountain; he knocked down outside jumpers, made jumpers from mid-range, set up teammates for lay-ups, rebounded, and had some great finishes of his own inside.

Shawn Strickland, Middletown-Strickland showed flashes where nobody on the floor could guard him. He has a quick first step, is a smart distributor in transition, and has standout quickness.

Alex Perrone, Loomis Chaffee-Wide bodied big man who changes the game inside the paint on both ends of the floor.

Pat Kelly, Hingham-A real up and comer, he made a name for himself by showing flashes tonight.  Expect to hear a lot about him in the future.

Andrew Bartlett, N/A-This heady senior was always in the right place at the right time tonight.  An unselfish player who allows his team to win games.

Isaac Carp, Pingree-He isn’t the quickest or flashiest but definitely one of the most consistent, smartest, and hardest working.

Justin Pollard, Thornton Academy-Seemingly all over the court, Pollard was incredibly active earning his team second chance possessions while also scoring and distributing.

Andrew Baron, St. Bernard's Central Catholic-Still just a junior, Baron’s performance showed that he is a player to keep an eye on moving forward.

Max Butterbrodt, St. John’s Prep-He already claimed a state title in his freshman season and could be next in line to make headlines at Prep.

Jerrell Smith, University-Fast and athletic guard who makes his living by attacking the rim and bouncing up to finish among the trees.